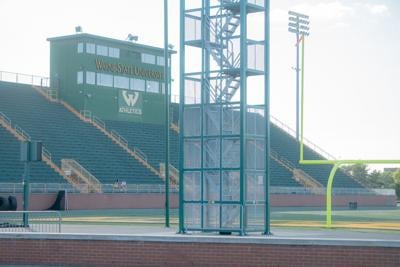 The Warrior Band, Wayne State's marching band, is back on campus for its 2021 season.

The band's 2020 season was canceled due to the COVID-19 pandemic, The South End reported.

“We're used to doing orientations in person and physically seeing someone's face and with everything being virtual (it) is like just sending out emails and interest forms to reach out to as many people virtually as possible,” said senior drum major Katrina O’Higgins. “So that's obviously impacted us because you try to make a connection with someone like face to face.”

The band performed its first show of this season during WSU’s opening football game on Sept. 2, said Director of Athletic Bands James Fusik.

“The game was very emotional in some ways, just seeing a very diverse campus community that we have, all coming together at the football game, cheering along with the team and giving a lot of support,” Fusik said.

Band camp was held at WSU’s football practice field in preparation for the season from Aug. 24-27, O’Higgins said. Members rehearsed from 9 a.m. to noon, then practiced songs and drills from 2-5 p.m.

“So going to work with the band students did very well, especially with difficulties of the heat since it was pretty much the hottest week all summer," Fusik said. “The heat index was in the 90s or close to 100 on some days. We had to be very careful with how often we break for water and stay cool.”

Fifth-year student and drum major Alex Pickell said it was good to meet new members during the camp.

“I think because we had a lot of members that were interested in joining for two years now and they had signed up last year and we had never actually got a chance to meet or anything like that,” Pickell said, “I'm now getting the chance to put a face to the names that I had been seeing for like a year and a half or more.”

The band plays a crucial role in connecting students, though it’s been more challenging during the pandemic, O’Higgins said.

“I think like I've never had a gen-ed class where I haven't known someone from marching band," O'Higgins said. “So I had English classes and speech classes where I've always known one person and that's just because of marching band.”

Pickell said he is grateful for the opportunity to reunite with fellow band members this season.

“It is just a lot of fun being a part of it,” Pickell said. “It is kind of like one of the things that you take for granted, I think as well with like everything that had changed because of the pandemic.”

This season’s band is slightly smaller than pre-pandemic levels, Fusik said. There are about 60 members this season, O’Higgins said.

“Based on where we had two years ago, we did decrease, by about, I want to say around 10 members,” Fusik said. “But it's kind of in line with, with similar trends that have been reported kind of across the general campus population.”

O’Higgins said though there were about 80 members when she was a freshman, she is comfortable with this season’s numbers.

“I would rather take 60 people who want to be here and want to be a part of the community than 80 people who are just not really into it,” O'Higgins said.

The band has chosen to follow social distancing guidelines in line with Centers for Disease Control and Prevention recommendations this season, Fusik said.

“If the coordinates of the drill require going from one spot to the other, even if everybody's moving in a different path, as long as they maintain the same step size throughout the move, then the distance maintains,” Fusik said.

Members also observes mask wearing, O’Higgins said. Specialized masks will be used for future practices and performances, though they have not yet arrived.

“The university is supplying us with musician masks, which are masks that actually do have an opening, like a slit in the middle that you can insert a mouthpiece through,” O'Higgins said.

Though the band has had to make adjustments during the pandemic, members are happy to be back, Pickell said.

“It's kinda cool because there's like an energy to it that you can tell everyone who's a part of it really wants to be here and it's really something that they've missed out on,” Pickell said. “So they want to be able to have that opportunity again.”

Fusik said the band is a positive opportunity for WSU students.

“Marching is kind of this unique activity. It's social, artistic, but it's also a little bit athletic and that's one of the great sort of diverse things about the class that celebrates what the university is all about,” Fusik said. “That you can have different majors and different hobbies and different interests, but where we all come together to form this one product.”

The Warrior Band’s next performance will be held Sept. 25 at 6 p.m. at WSU’s Tom Adams Field.

Grace Reyes is a contributing writer for The South End. She can be reached at gracereyes@wayne.edu.