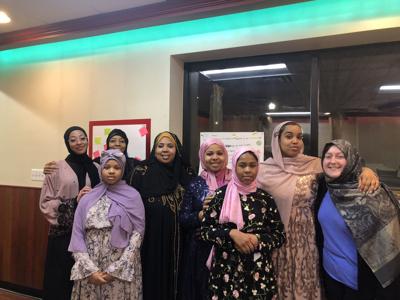 World Hijab Day is an annual event celebrated by Muslims and non-Muslims around the world. The article of clothing Hijab, worn by Muslim women, covers the hair and body for religious and modest reasons.

“(Nazma Khan) created World Hijab Day to give non-Muslims a better understanding of why Muslim women wear the hijab — what hijab is all about,” said Helana Bowe, founder of Miss Muslimah USA and co-organizer of the local event.

Founded by Khan in 2013, World Hijab Day aims “to counteract some of the controversies surrounding why Muslim women choose to wear the hijab,” according to the World Hijab Day website.

“It is such a beautiful thing to see non-Muslims wearing hijab and standing in solidarity with us,” Bowe said. “It gives me hope that one day the media will shine a positive light on women in hijab.”

Former WSU student Hannah Bonenfant attended the event as an ally to Muslims.

“I think events like this are really important, especially when it’s open up to the general community,” Bonenfant said. “It offers a very open platform for other people to learn more about other cultures, especially within the religion of Islam since it is so demonized by the media and general society.”

Bonenfant said it’s important to keep an open mind and learn about other religions and cultures.

“I would encourage someone who isn’t Muslim to come to something like this just to educate themselves and expand their ideas and beliefs about other cultures and other religions,” she said.

Attendee and daughter of Helena Bowe, Hawa Bowe, said World Hijab Day is a day where her struggle is recognized yet celebrated.

“It is a day for people to recognize why we wear it. There isn’t only one way to wear it. People wear it differently. Everyone has their own personal relationship with it,” Hawa said.

World Hijab Day trended across social media with displays of women celebrating and talking about the hijab.

WSU senior and public health major Raneem Nasralla shared an Instagram post with the hashtag #WorldHijabDay, displaying her feelings about wearing the hijab.

“It's like you have your own super powers built in with every hijab you wear,“ Nasralla shared. “And as days go by, my love for the hijab grew more and more because it brought out my self confidence and my self empowerment.”

Nour Rahal is a contributing writer for The South End. Rahal can be reached at nrahal1@wayne.edu.

All photos and video by Rahal.