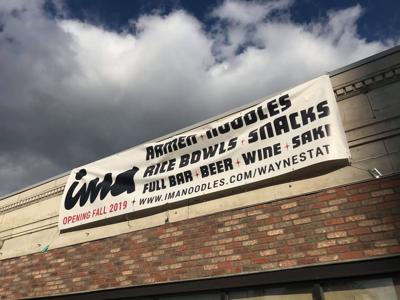 The noodle shop named Detroit Free Press’ 2019 Restaurant of the Year, Ima, will be opening its third location on the corner of Warren and Cass Avenue this November.

According to chef Mike Ransom, the new addition to the Ima family will be its largest location — approximately 3,700 square feet. The two other locations are anchored in Madison Heights and Corktown.

“With the lack of outdoor element with this location, we will be making up with it by having more seating and also an area to have DJ events and to have live music,” Ransom said.

Ransom wants the new location to be approachable and affordable to college students in the Midtown area, he said.  With the added space of the new location, grab-and-go catering options and full cocktail service will be offered.

“When I went to Ima, I thought it was very good, but I feel like them adding a location to Midtown will change the atmosphere and the type of people that will go there,” WSU student Westin Bate said.

While Bate enjoyed his meal at Ima, he felt the prices were more on the expensive side, he said.

“The noodles were thick,” Bate said. “It was fresh and well-cooked, and the portions are large, but I did think it was kind of expensive for noodles.”

Dishes on Ima’s Corktown menu range from $10 to $15, according to their website.

Ransom said they are currently working with Wayne State to see if they’ll be able to accept Warrior Dollars and student OneCards.

“I definitely love the food,” said Mark Kurlyandchik, Detroit Free Press’s food critic. “It is very flavorful and exactly what you want to eat during the cold Michigan winter.”

The Midtown menu will differ from its other locations’ menus, but will still keep some of the key items like the seafood kimchi ramen, Ransom said.

“It's (Ima) Japanese comfort food, but because we use local ingredients and some French techniques, it's definitely not traditional Japanese,” Ransom said.

American palettes are different, so Ransom tries to appeal to those taste buds while incorporating Japanese style into his food, he said.

“I am not the biggest fan of Asian food, but since trying Ima, I continually find myself in the mood to go back,” WSU student Joseph Naman said.

Ransom is excited to see how Ima will become a resource to WSU students, he said.

“I think the new location will be a perfect fit because ramen is already thought of as the perfect college food and so now to put it on the intersection right on Wayne State’s campus is really great,” Kurlyandchik said.

Grace Reyes is a contributing writer for The South End. She can be reached at gracereyes@wayne.edu

Cover photo by Jonathan Deschaine. Jonny is the multimedia editor for The South End. He can be reached at jonathan.deschaine@wayne.edu