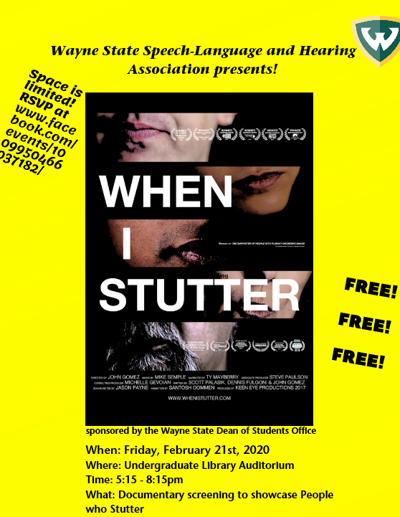 Millions of people around the world stutter. It’s been documented for thousands of years. But the speech disorder continues to puzzle researchers, according to Wayne State professors.

On Feb. 21, the WSU Student Speech and Hearing Association hosted an on-campus screening of the documentary “When I Stutter,” which explores the lives of 19 people who stutter. Film director John Gomez was present for a panel discussion after the credits rolled.

“The more we have films like ‘When I Stutter,’ the more people are educated about stuttering and the more they become aware about the issues that impact people who stutter,” Gomez said.

By definition, stuttering affects speech but external factors also play a role, Dr. Derek Daniels said. Whether it’s onscreen or in everyday life, society’s response to people who stutter can have an impact.

Daniels directs graduate research in the WSU Department of Communication Sciences and Disorders. He also happens to be a person who stutters. His studies examine public understanding of the speech disorder and other variables that influence the experiences of people who stutter.

The film and television industry can do better when it comes to how stuttering is represented in media, Daniels said.

As of 2020, the scientific community has yet to determine the root cause for stuttering.

Dr. Shelly Jo Kraft is a professor of speech-language pathology & audiology at WSU. Much of her research is focused on genetics, and how it plays a key role in stuttering.

Kraft said 90% of people who stutter have another relative that stutters. She and her research team are collecting saliva samples from people around the world, hoping to discover the gene that causes stuttering.

“My fire, my passion comes from hunting down the cause,” she said. “I am truly entranced with the mystery of stuttering.”

About 3 million Americans stutter, according to estimates from the U.S. Department of Health and Human Services. Around 10% of children will stutter for a portion of their childhood. About 75% of children lose their stutter by adulthood, but if a stutter lasts beyond childhood it will likely be lifelong.

Australia has the highest concentration of people that stutter, with 13% to 15% of the population having the condition, Kraft said. She shared an anecdote about the relative ease of finding test subjects in Australia.

“It’s kind of cool. You go to the grocery store, the person checking you out stutters,” Kraft said. “You go to a shop, and they say, ‘Why are you an American here in our country?’ And as soon as I tell them, they say, ‘I started as a kid, my mom still stutters,’ and I'm coming back with spit kits.”

Speech-language pathologists can play an important role in the lives of people that stutter, Daniels said. In addition to providing speech therapy, they can also help set the tone for families and loved ones.

“Facilitating a conversation with the families about what’s helpful and what’s not helpful from the person’s perspective I think is really good,” Daniels said. “You may think that finishing a person’s sentences is helpful, but in fact, it has the opposite effect.”

As a student pursuing a career in speech-language pathology, the film was both inspiring and informative, President of WSSLHA Andrew Manardo said.

“For someone who stutters, it's not just the stuttering that they work on. It's also the fluency, it's the speech, it's the language aspects,” Manardo said. “I just think being able to show the community just how impactful this can be, it can really open your eyes to something new and something that we take for granted.”

Jack Thomas is a correspondent for The South End. He can be reached at jack.thomas3@wayne.edu. Cover photo courtesy of Andrew Manardo.