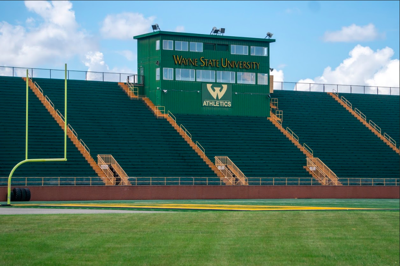 Before the Great Lakes Intercollegiate Athletic Conference decided to suspend all sports competition in 2020, another important part of the athletic experience canceled their season.

The Warrior Band –Wayne State’s marching band– decided not to perform this fall due to the COVID-19 pandemic, WSU Director of Athletic Bands James Fusik said in a July 28 statement on Twitter.

“Our hearts go out to the seniors who will not have a chance to cap off their careers with a final season, and the Warrior Band is grateful for stewardship during a period of great growth in quality and size of the ensemble,” he said in the statement. “We will return strongly but will greatly miss the contributions of our seniors.”

The cancellation of the marching band season was hard for members that had been waiting in anticipation for months, said Drum Major Alex Pickell, a WSU senior.

“I think the call to cancel was a bit premature, but given the circumstances these decisions are never easy,” he said. “Personally, I don’t see how social distancing is any harder to accomplish for cheer, dance or band as it is for football, but now that the GLIAC have postponed sports until January, I understand the decision.”

In an email to The South End, Fusik said it’s upsetting the pandemic has affected many opportunities that are available to WSU students.

“We are committed to minimizing the risk of COVID transmission and are disappointed that the pandemic has caused the loss of such a vital campus experience for many of our students across all areas of Wayne State. We eagerly look forward to a strong return after pandemic conditions improve,” Fusik said.

Flute Captain Julie Nitz, a fourth-year student at WSU, said being a member of a team brought her closer to other students.

“I joined in order to meet people on campus, to get involved with the university beyond just academics and to help me balance school and social life,” Nitz said. “For me, the marching season is a way to socialize with friends, meet new friends and be active outdoors. Marching band really helps my health mentally and physically so I am incredibly sad to lose this season, but hopefully, I will be able to march next season as well.”

While Pickell thought their season might be canceled, the final determination was still difficult to hear, he said.

“It was pretty heartbreaking. It was something we had all thought might be coming, but no amount of preparation made it any easier for us to take the news,” Pickell said. “The marching season is something band members look forward to as soon as the previous season ends.”

The band will resume its season once it is safe to do so, Fusik said. In the meantime, he advises everyone take preventive measures.

Photo by Quinn Banks, multimedia editor for The South End. He can be reached at multimediaeditortse@gmail.com.