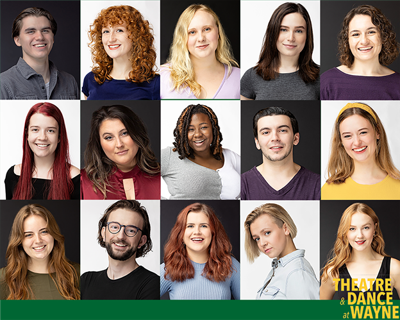 Seniors of The Maggie Allesee Department of Theatre and Dance performed their senior showcases at the Manhattan Movement and Arts Center in New York City on March 16.

This marked the first time the Theatre and Dance Department attended the showcase in person since March 2020. The department held a virtual senior showcase in 2021.

After facing various challenges with acting classes over Zoom during the pandemic, senior BFA in acting theatre major Jacob Wilson was grateful for this year’s in-person showcase, he said.

“It was just exciting to see everybody doing their best at showcase while we had all of these obstacles beforehand,” Wilson said.

The showcase in New York City was held annually before the COVID-19 pandemic and provides seniors an opportunity to perform for casting directors, talent agents and personal managers. This helps students make connections after graduation.

This year, students arrived at the venue around 10 a.m. and began their showcase at 6 p.m. Each student performed a combination of two pieces: monologues, songs and scenes.

Senior Ethan May performed a comedic scene from the film “The Spectacular Now,” by Scott Neustadter and James Ponsoldt, where his character inspired a girl to have more confidence in herself. May said he wrote his second scene to be more dramatic, featuring a character who found out his girlfriend is seeing his friend.

“That one is a little heavier. It still has some moments of levity in it. You want your pieces in your showcase to contrast, so one was like a comedic scene and one was a dramatic scene,” May said.

Wilson performed a monologue from the film “The Shape of Things” by Neil LaBute.

In his performance, he portrayed a character who had just found out his girlfriend had been using him for an art project, recreating him in her image, Wilson said. His monologue conveyed disappointment as he tried to convince her of her inhumane actions.

“I just want to kind of layer in as many emotions and beats of the character that I could,” Wilson said.

In his scene, Wilson convinced another character to take a risk by climbing a tree.

“I just wanted to show different parts of my performance, like what I could give,” Wilson said.

Senior BFA theatre major Morgan Listenbee performed a scene from the play “BLKS” by Aziza Barnes. The scene was comedic and flirtatious, where her character had to explain their culture to a white woman.

“My character has to really enlighten her on the Black community, Black culture, and Black lifestyle in this way that she gets it... but will she ever really get it is the question,” Listenbee said.

In her monologue by Dominique Morisseau, Listenbee played a reporter who asked for her article to be printed. The person she was talking to was refusing, jeopardizing her chances of becoming a professional journalist.

She said she wanted to convey a serious and dramatic tone, with hints of comedy.

“It was a very challenging, high-stakes moment. The whole monologue was trying to achieve to the audience that this is my time to shine. This is my only time to shine as a journalist. Let me do it,” Listenbee said. “Whether it was an emotion, whether it was a thought, a theme, or whatever it may have been, we’re trying to convey that to the audience to have them take away something from these acts from what we’re doing as actors.”

Listenbee said she learned to trust herself as an artist. After second guessing herself leading up to the event, she was glad for the opportunity and for what she took away from it.

“It was very bittersweet and emotional because I’ve been waiting for this moment for so long,” she said. “We’ve been preparing for showcase in New York for a very long time, so all the moments came to this.”

The stakes were high but the experience was rewarding, May said.

“The best experience is just going out there. It’s four minutes that epitomizes your entire college career,” he said. “Your college career boils down to four of the most equal combination terrifying and exciting minutes of your life.”

May said the outcome of hard work was gratifying for himself and his fellow seniors.

“It was empowering to know that you worked towards a result,” he said. “It’s also really exciting to watch your peers do the best art that you’ve seen them do.”

Liliana Webb is a contributing writer for The South End. She can be reached at gr5998@wayne.edu.

Cover photo provided by Theatre and Dance at Wayne.