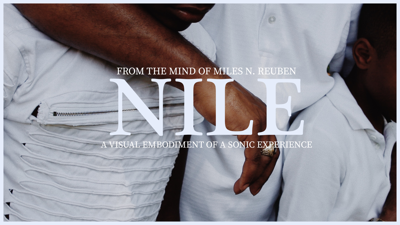 Wayne State senior Miles Reuben recently released his short film, “NILE: A Visual Embodiment of a Sonic Experience,” which follows a son as he navigates an emotional journey to reconnect with his late father.

The five-part story was presented in coordination with filmTOY studios, according to Reuben. It was made available for viewing on Aug. 28.

Plans to film this project began prior to the pandemic, but once the COVID-19 pandemic struck, the initial direction of the film shifted.

“The original inspiration for it was the song ‘NILE’ by Beyoncé and Kendrick Lamar, and I kind of just wanted to make sort of like a mock music video for the film, but when the pandemic happened, and we were kind of locked up in the house and stuff, the story molded itself to what it is today,” Reuben said.

With all of the things happening in the world right now, it is easy to succumb to the pressure. While creating during such a trying time may be a challenge to some, creating this film was a chance to escape from this outside negativity, Reuben said.

“It was actually very relieving for me, and kind of just for everybody involved, with the pandemic going on, and also just different racial crimes and justices like police brutality and George Floyd and Breonna Taylor,” he said.  “I was going into like a little bit of a depressed phase when I thought I couldn't make it at first because of the pandemic, so I was just excited to get it going. It was very relieving.”

In addition to being able to take a break from world issues, he said it was also an opportunity to hone in on different skills.

Faith Berry, a fourth-year fine arts student at WSU and the female actress in the film, said “NILE” was an opportunity for her to further explore film acting.

“I hadn’t done much film work outside of this, but Miles was really great and clear about how he wanted my sections to be,” Berry said. “He also gave me a lot of creative room as well. Overall, it was super fun, and for as long as we were outside I didn’t get bit by any mosquitoes, so that was a highlight.”

The group was very proud of the way the film came together in the end. Cinematographer Gary Jackson said parts of the project came out a lot better than the team expected.

“There were some instances where I was just like, ‘Oh wow, I didn't realize we did that good’ because when we had went out and filmed the part in the sand, we literally could not see what was on the camera monitor,” he said. “I had to put a t-shirt or a jacket on top to even get a glimpse of what it looked like.”

“NILE” was recognized by two short film websites, Retrospective of Jupiter and Film Shortage, which have made it available on their digital platforms free of charge.

Although Michigan is often overlooked by the film industry, Jackson said he hopes to grow interest in the local film scene.

“We are trying to bring awareness to filmmaking in Michigan, because we feel like that most people that want to get out of this industry feel like they have to leave Detroit,” he said. “And so we want to try to bring a system to Detroit to where not only our people in this community feel that they can be a part of it, but people from other states or other countries, feel comfortable coming to Michigan and say, ‘Hey, we're going to film here.’”

Although the film was his vision, Reuben said he hopes the work transcends being something that he created. He wants it to be a film his viewers can truly identify with.

“I just hope that people resonate with it and they find pieces of their own self or their own life in the film,” Reuben said. “I hope that, my biggest hope is that this is not just like my film anymore, now that it’s out into the world, and when people watch it, they have this sense of pride and inspiration and influence from the film that makes it feel like it's their film too."

“NILE” can be found on Vimeo.