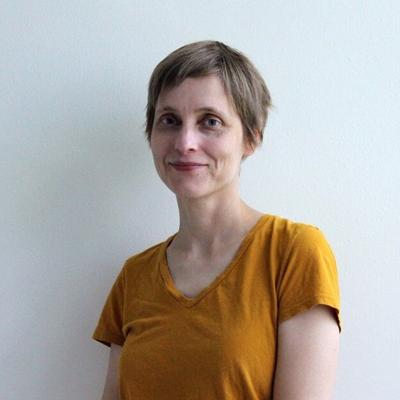 Aubert said she was awarded $25,000 and support in the development of a short film displaying her work. She also plans to use her fellowship to further her passions in visual and literary arts.

Aubert has experience in producing written works, she said.

“I published first, a book about Lafayette Park, which is like a neighborhood in downtown Detroit that is sort of well-known for its architecture,” Aubert said. “I co-edited it with two other graphic designers. And then I’ve done some other artist books, but then most recently I did a book about the Detroit Printing Co-op, which was just a print shop in downtown Detroit from 1970 to 1980.”

Although she could have applied for an award in the visual arts category, Aubert chose literary arts because she has written and co-written books on graphic design, she said.

Aubert's books include “The Detroit Printing Co-op: The Politics of the Joy of Printing,” “Marking the Dispossessed” and “Thanks for the View, Mr. Mies: Lafayette Park, Detroit.”

“I felt like I needed to be able to write because in graphic design when you’re working with a client it's pretty straightforward, and you’re kind of responding to the client’s needs," Aubert said.

“We organized a book launch for ‘Thanks for the View, Mr. Mies: Lafayette Park, Detroit,’” McGowan said. “Since then we've run in similar circles, and I've admired her work as an artist, activist and organizer. Her Excel art and ‘The Detroit Printing Co-op: The Politics of the Joy of Printing’are especially exciting to me.”

Much of Aubert’s writing is integrated with her teaching, she said. She emphasizes Detroit’s graphic design history in her lectures.

“I did a lot of work with sequential art and design during my time there so her knowledge of graphic design was extremely helpful in broadening my perspective and supplementing my practice,” Gardner said.

Aubert said one of her recent interests includes integrating other topics in graphic design, such as politics and activism.

“During covid over the last year I’ve been interviewing different designers who sometimes have used graphic design in service of certain movements or political work,” Aubert said.

Gardner said he went to Aubert for advice and insight during his graduate program.

“She was very helpful when it came to exploring the various methods of printing, binding, and composition for my pieces,” he said. “I believe she really helped expand and advance the graphic design program at Wayne State. One of the first (probably the first) MFAs (Master of Fine Arts) from that program graduated during my time there if I remember correctly.”

Aubert deserved the fellowship because she’s collaborative with artists in the city, has impactful work and supports all artists, Gardner said.

“Her graphic design class and my electronic music ensemble class had an interdisciplinary collaboration in 2018-19,” Park said. “Students at the design class made concert/tour posters for my ensemble, and the ensemble used them to promote the events throughout the year. All artists involved were engaged and passionate. Danielle and I were pleased about the learning experience we provided to the students and the resulting products.”

Aubert is a great candidate for the fellowship because of her creativity, Park said.

“In addition to being an excellent artist, she helps her students and collaborators from multiple disciplines grow and shine,” Park said. “She reaches out first to help those new to the community (like me a few years ago). Collaborating with Danielle was playful and delightful, and I trust her artistic decisions and directions. I think Kresge saw these traits in her.”

Marisa Kalil-Barrino is the arts and entertainment editor at The South End. She can be reached at artsandentertainmenttse@gmail.com.