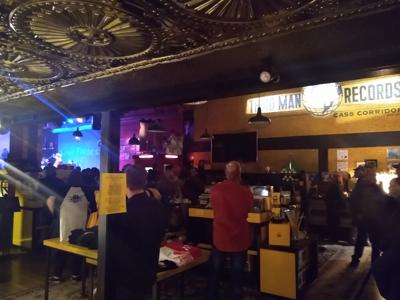 Over 200 people from across the U.S. gathered at Third Man Records in Midtown on Feb. 21 to attend All Access Cafe, a free event featuring music and poetry by artists with disabilities.

The audience — many of whom were deaf or hearing-impaired themselves — flooded the venue, crowding around the stage and spilling over into the adjacent merchandise store.

Some performers were accompanied on stage by signers, who communicated the music and words to the audience using sign language. Several of the performers could not hear applause, so some attendees expressed their approval of the art by waving their hands instead.

Liebler said the purpose of All Access Cafe is to educate people about those with disabilities through entertainment.

Levin said his poetry focuses on the innocence and naiveness of people’s reactions when approaching sign language.

“They’re coming up to us and they’re interrupting a conversation that sometimes is really heavy. We’re talking about a really heavy topic or something super serious, and then somebody comes over and they’re super excited, and say ‘Oh my god, you’re signing! I learned sign language when I was a kid!’” Levin said.

Joseph read poetry from her new book published by the Wayne State University Press. Her readings were about her childhood in Kolkata, India and about being diagnosed with polio. Carmaig de Forest performed songs from his 1987 album “I Shall Be Released,” recently reissued by Omnivore Recordings.

“I have a tremor and I’m neurologically wired a little different, the way I talk too,” de Forest said. “It’s funny because I can prepare a song and perform it no problem, but when I’m talking, I’m very hesitant in my speech.”

Hip-hop artist and Deaf and Professional Artists Network co-founder Sean Forbes performed songs from his new album “Little Victories,” with his backup band, which includes a deaf turntablist. Liebler said Forbes is the inspiration behind the cafe.

“The whole idea comes from Sean, because I used to open up for him in different places and doing poetry in front of deaf audiences, and they really responded to the work,” Liebler said.

The Knight Foundation funded the All Access Cafe with a two-year grant in November 2018. After Friday’s event, Liebler said he plans to host the cafe again featuring more artists with disabilities in April, June and August.

Zachary Marano is contributing writer for The South End. He can be reached at zacharymarano@wayne.edu. Photos by Marano as well.