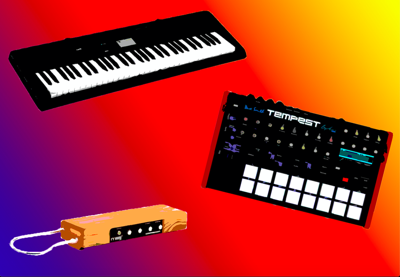 In a classroom filled with synthesizers that have flashing lights, dozens of electrical cords and buttons — a composer and WSU assistant professor of music technology, teaches the elements of electronic music.

“Detroit has an amazing history of electronic music,” Joo Won Park said. “I want to share what we have as a Michigan community and am interested in having a meeting point for composer, artists and listeners.”

In order to fulfill this goal, Park has organized the second year of the Unrecordables Music Festival, he said. The festival will include a series of electronic music performances, workshops and hands-on demonstrations.

Unrecordables Music Festival will take place on Sat. Oct 19, at WSU from 1:00 until 9:00 p.m. The festival is free and open to the public according to Park.

“We are going to have demo rooms where the audience can actually go and play the music so I hope they will check that out, Park said.

North Coast is a collection of southeast Michigan musicians and artists who make electronic music, Bauer said. Their workshop at the festival will focus on designing and making instruments.

“It (electronic music) for me, has been an evolving thing of gear acquisition syndrome and it is a constant cycle of buying things,” Henry Birdseye said, a member of Detroit Synthesizers Project.

“I have been reborn through electronic music.”

Detroit Synthesizers Project is a group of artists whose goal is to get out in front of the public and perform, he said.

“We are trying to make it easier for people to get into electronic music and synthesizers because it can be intimidating and it is expensive,” Bauer said.

“It (electronic music) for me, has been an evolving thing of gear acquisition syndrome and it is a constant cycle of buying things,” Birdseye said. “I have been reborn through electronic music.”

North Coast Modular Collective is hoping to introduce more people to electronic music and the genre’s instruments at the festival, Bauer said.

“This is a more academic setting that the venues we are used to, but we are always looking at ways to engage people, especially people who wouldn't normally get engaged with us and modular synthesizers,” he said.

The goal of the event is to pass on to the audience knowledge of electric music and its various forms, Park said.

“Any tech for me just extends the possibilities of what you can do as a composer and performer,” Park said. “I enjoy making things that I cannot do as the human self. More than what 10 fingers can do.”

For more information on the festival and how to get involved in electronic music at WSU, visit https://music.wayne.edu/music-technology/index.php​.

Graphic by Guneet Ghotra. Guneet is the graphic designer for The South ENd. She can be reached at fz8387@wayne.edu