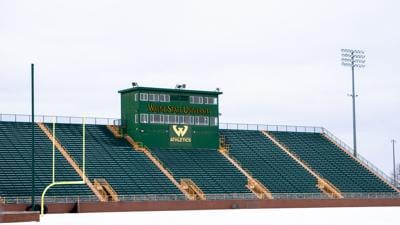 The Warrior Band, Wayne State’s marching band, is expecting to take the field once again for the 2021 season.

The Warrior Band announced the suspension of the 2020 season due to the COVID-19 pandemic on July 28, 2020, which was followed by the GLIAC’s decision on Aug. 12, 2020 to cancel all fall sports competition.

The band’s future is very promising, Director of Athletic Bands James Fusik said in a March 9 email to The South End.

“(P)lans are being made to return to the field in fall 2021 but with some social distancing measures,” he said. “It won't be exactly like it was before, but I am confident we can still guide the spirit of Warrior support for our team and school.”

In 2016, the year fourth-year student and Warrior Band drum major Alex Pickell started at WSU, the band had about 40 members, he said. Growing over the years, the Warrior Band will consist of about 100 members in the 2021 season.

“I just hope that we can recover from it(the pandemic). (T)he band had been in a position where it’d been like kinda steadily growing over the past couple years,” Pickell said.

Getting back into normal operations will be an adjustment, Fusik said.

“While I hope the numbers of members will not be hit too hard, it will be a bit of a restart for momentum and growth year to year,” Fusik said.

The band is focusing on orientation and engaging with incoming freshmen in the fall, said Katrina O’Higgins, a junior drum major and instrumental music education student.

“I think the biggest challenge we’re just going to have to face is just recruiting and just reminding everybody that we’re still out there,” O’Higgins said.

The Warrior Band plays a crucial role in connecting students, O’Higgins said, which has been made difficult by the pandemic.

“(I)n my personal experience, in all of my gen-ed classes, I’ve known at least one person in the class just due to marching band. So the fact that we’re not having this experience and kind of building our community is definitely hard for everyone and I think faculty as well,” O’Higgins said. “It’s been really hard for me not to have that community to just rely on these past couple months. My fall felt so empty.”

Both Pickell and O’Higgins said they were confused by the sudden cancellation of the band’s season.

“I think it definitely could have been handled better, and I believe they did what they [thought] was right at the time, but I feel like marching band wasn’t seen as a priority like other the sports [were],” O’Higgins said. “There wasn’t even a talk about like maybe we can do this in the spring when it’s warmer weather; it was kinda just flat out cancelled.”

There was no attempt to move the class to a virtual setting because of its size and direct connection to the football team, Fusik said.

“In a way, we were kinda blindsided,” Pickell said. “At first, we were like confused because we thought that like football and all the other sports were still going to be active, but marching band wasn’t. And then, a week later, they ended up cancelling the fall sports as well.”

Fusik said he recommends students get involved with the Warrior band.

“(I) encourage any interested students to please sign up for the course and plan for band camp in August, events beginning from the 23rd and going all the way into the beginning of the semester on Sept. 1,” Fusik said.

According to WSU’s preliminary academic calendar for the 2021-2022 academic year, open registration for fall classes will begin March 29.