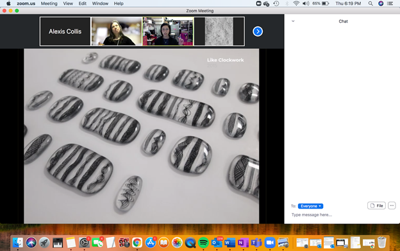 Lee discussed the origins of her artwork and provided deeper insight on some of her pieces throughout the lecture.

Lee said her interest in language plays a vital role in her artwork. Her passion for language started when she was a child. She was raised by her grandmother who only spoke Chinese and the two would converse solely in the language.

“What I hope that is clear in my work is that I’m really concerned about legibility and that these objects are something to read while also having a physical presence to contend with,” she said. “The poet in me is basically trying to write in glass and in doing so that means I write in light and I write in shadow.”

The origin of the lecture name is with unusual terms, Lee said.

“I titled my talk ghost words because the definition of a ghost word is essentially a word that's a mistake,” she said. “It’s a word that kind of like finds its way into an authoritative reference of language like a dictionary, either through a typo or mispronunciation or mistranslation and most of the time these glitches just disappear over time.”

“Helen Lee is a nationally recognized visual artist working primarily in glass, but whose practice also incorporates her background in design,” Kalman said.

Lee has experienced the diversity of speech throughout her life, she said.

“From an early age I understood language was not fixed,” Lee said. “It changes shape and it has different registers as I move from one to the other.”

Elise Martin, a WSU art major, said she found Lee’s lecture to be rich with information and personal history.

“What most impressed me about Helen Lee’s work was the way in which she’s able to take something as abstract and intangible as ‘language’ and bring it into a physical space,” Martin said.

Lee finds art as a powerful form to express linguistics, she said.

“And I lean on this expression to encapsulate that hard to define space between two languages and I take artistic liberty in redefining ghost words to speak to what I try and uncover in my work, what is hidden and what is erased and what is unseen in language,” Lee said.

“It seems like a very bold task for a visual artist to undertake and, though Lee is obviously capable of making really beautiful objects out of glass, she isn’t satisfied with aesthetics alone, and instead strives to push and stretch the material to encompass all the nuances of language,” Martin said.

Alexis Collis is a contributing writer for The South End. She can be reached at alexiscollis@wayne.edu.