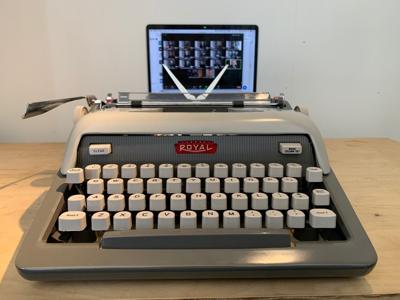 Ahead of the Nov. 3 election, members of Wayne State University and University of Michigan have the opportunity to send a message to our next president.

Since 2004, the “I Wish to Say” project has encouraged Americans to express their political hopes to the next president of the United States, said Sheryl Oring, chair of the James Pearson Duffy Department of Art and Art History at WSU.

Participants state their message to a typist, who uses a typewriter to transcribe the message onto postcards, which are mailed to the White House, Oring said.

The belief is that the sheer amount of messages will grab the president's attention and encourage them to be receptive. Over the duration of the project, more than 4,000 postcards have been mailed.

Inspired by her time as a journalist, Oring said the idea is to capture the same feeling as a “person on the street” interview. She was also inspired by her grandmother, who worked as a secretary in the University of Maryland’s political science department —hence the vintage aesthetic and typewriters.

“I find this method causes people to slow down and contemplate what’s important to them when it comes to values and politics,” Oring said. “One element that leads to this is the active listening done by the typist. People respond to that and really feel that they are heard.”

With the help of student typists from WSU and U of M, Oring’s performances will allow an even greater number of voices to be heard.

After plans from her department’s Democracy & Debate Theme Semester were hindered by the COVID-19 pandemic, Erica Ito, musical theatre major at U of M, said she was eager to volunteer as a typist.

“Having any direct way to participate in our democracy can be so empowering in this highly divisive and violent time, especially for marginalized folks and BIPOC,” Ito said. “I honestly hope this project can be cathartic for some folks, or give any sense of control and participation in the election that feels so wildly out of our control.”

Amelia Rennell, WSU fibers graduate student, planned on being an in-person typist earlier this year, she said. Although the pandemic prevented her from fully participating, she still saw tremendous value in the project.

“I was drawn to [Oring’s] work due to its encouragement of personal reflection, and its ability to empower individuals in regards to their roles within our government,” Rennell said. “The performances give people a chance to slow down and truly reflect upon what they are hopeful about, what they hold issue with, and what they can do about it.”

While the “I Wish to Say” project has toured to many different U.S. cities in the past, this newest collaboration is tailor-made for Michiganders, Oring said.

Oring said her sights are aimed toward the future, encouraging students in particular to voice their opinions.

“Young people are the key to our future and it’s so important to hear about their experiences at this particular point in history. I really hope lots of Wayne students will get involved and speak their minds through this project,” she said.

More information on “I Wish to Say” and registration can be found on WSU Art and Art History’s website.