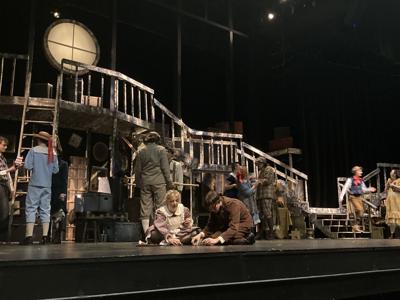 Wayne State’s Maggie Allesee Department of Theatre and Dance hosted the production of  “The Snow Queen” from Nov. 19 to Dec. 11 at the Hilberry Theatre.

This marked one of the Theatre and Dance Department’s first live performances since it resumed in-person operations for the fall 2021 semester.

Written by Tyler J. Monroe, and adapted from the Hans Christian Andersen fairy tale, “The Snow Queen” tells the story of Gerda and her treacherous journey to find her best friend Kai and save him from the ruthlessness of the Snow Queen.

Freshman Dory O’Dell played the Snow Queen and said they admire the influence the tale has had on other works.

“It’s a very fun and very cute story of friendship, love, and hope,” O’Dell said. “The part I find myself drawn to the most is that, because it is such an old story, you can see how parts of it have inspired popular media that came after it like ‘the Lion, the Witch, and the Wardrobe,’ ‘Alice in Wonderland,’ and, of course, ‘Frozen.’”

Monroe’s play took a creative approach to the old tale. Monroe said he wanted to capture themes of strength and the beauty of love in his adaptation.

“I think the thing I was most drawn to was the relentlessness of the protagonist Gerda,” Monroe said. “I just really appreciated a young girl stacked against all sorts of odds, all sorts of complications and trials, to sort of save her friend. I just thought that was a really beautiful and inspiring story.”

Throughout the play, audience members were active participants in Gerda’s journey by helping solve riddles and creating snowstorms with paper snowflakes to blow away mythical snow creatures.

The production of “The Snow Queen” also featured hand-crafted sets, in-depth special effects, and lighting that assisted in engaging the audiences with the show.

“We have this whole arsenal of little mini-sized lights…and I’m using a ton of them in this show as a practical effect, so that has been super exciting, and that process, creating this weird dichroic lightsaber type thing out of those has been really fun,” Strauch said.

O’Dell said they liked the incredible performances and special effects of “The Snow Queen.”

“Everyone in the cast brings something different to the table, and they are all absolutely delightful,” O’Dell said. “Another thing, though, is the incredible set and special effects our designers created for this show.”

Strauch said he hoped audiences found inspiration in the play.

“(T)hese shows are so important because they are what inspires young kids to get excited about live performance and want to do it or get inspired and just do anything,” Strauch said. “I mean, I think that’s the point of performance art, especially theatre, is to inspire people to take action.”

Katherine Stozicki is a contributing writer for The South End. She can be reached at hg8319@wayne.edu.