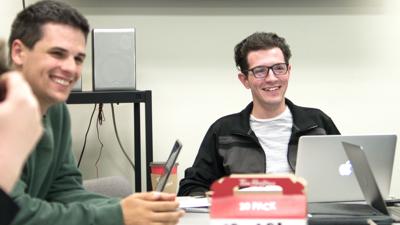 A group of eight guys sit around a table. They’re snacking on doughnut holes, sharing laughs and listening to music — but they mean business.

These eight guys are carefully deciding which artists will be signed to Old Main Records, an emerging student-run record label at Wayne State.

At the head of the table sits President Brendan DeRey. Over the summer, he and fellow music student J. Vincent Arniego decided to pursue the idea. They hoped to fill a gap for students wanting to break into the music industry.

“I found myself slightly frustrated,” DeRey said. “I'm a musician and have taken classes in music business. But as far as actual experience, I don't really have any, which is the reason why starting this label was very important to me.”

Old Main Records is a student organization with 14 members and is looking to expand. The label hopes to enlist students from other departments, like film and media arts majors, to work on creative projects, according to a press release sent out by the group. This could include traditional music videos or more experimental pieces.

The record label hopes to expand and bring in students with a background in business, marketing, writing, photography and graphic design.

“We're in startup mode,” DeRey said. “We're all kind of wearing multiple hats at the moment.”

Record label experience for students is “few and far between,” at least locally, according to music lecturer Jeremy Peters. This is one of the reasons he’s excited to be a faculty advisor for Old Main Records, he said.

“Developing a way for students to synthesize all the stuff that they learned in class and use it in a more hands-on way seems like a good win,” Peters said.

The artists and repertoire department is responsible for recruiting and managing artists. Music technology student David Jackowicz is in charge of the tech department and the distribution department, where he helps record the artists and releases their music on different platforms.

Music technology student Patrick Norton is creative director. For the past year or so, Norton has devoted much of his energy to Nice Place, an art and music venue where he also resides. As of recently, crowds have begun to exceed the venue’s capacity, Norton said. He hopes to bring the community he’s helped foster at Nice Place to a “bigger ball court.”

“Building a world around a specific project is something that I think we can accomplish with this organization,” Norton said.

Promotion is included in the package to help recording artists expand their reach. This will allow smaller artists to build their following and larger artists to market to their fans.

“It's very much a case by case basis,” DeRey said. “We are not going to say ‘no’ to whatever the (artists’) needs are.”

The members are planning an on-campus showcase Jan. 17 at Saint Andrew’s Hall, the church next to Alex Manoogian Hall. It will feature performances from Dirt Room, and local acts Mac Saturn, Craig Garwood and The Stools. A number of visual artists will also display their work.

Still in its early stages, the label is trying to spread awareness of its services on campus and in the local music scene, DeRey said. He hopes to solidify its standing for future generations.

“I'd like to think that there is a kid in elementary school right now that doesn't know he's going to be interested in music at some point, but one day he will inherit this organization,” DeRey said.