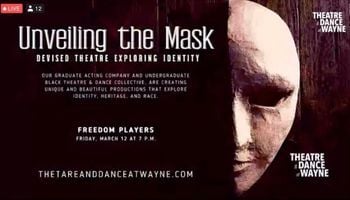 Undergraduate students of the Wayne State Black Theatre and Dance Collective’s Freedom Players held a virtual showing of their pre-recorded performance, “Unveiling the Mask,” on Friday at 7 p.m.

The play is about self-discovery, and the artists looked deep within themselves for true identity rather than the facade, or “mask,” they show to the world, Hines said.

“‘Unveiling the Mask,’ just like the graduate version, is about going within yourself and that part of yourself that you don’t unveil to other people, starting to discuss that, and that all deals with identity,” Hines said.

While Freedom Players actors received creative direction, each scene of the play was written by the members, said actress and freshman theatre major Amanda Kennedy.

“Our lovely directors, Billicia and Dr. Ras, they gave us prompts (that) asked us questions like ‘What makes you uncomfortable?’, ‘What’s a secret that you have?’ or just asked us what were our personal reactions to the capitol storming,” Kennedy said. “So we started with the prompts from that and then we wrote for 15 minutes, just got everything out on paper, and then after that, we revised it and put it all together.”

Actors were a part of the planning process for each scene from start to finish. Ashley Poulin, actress and freshman theatre major, said the highlight of creating her individual piece was the progression of the scene.

“I would have to say my favorite part of creating my piece was seeing it slowly come together,” Poulin said. “When we would do these writings and rehearsals, we would write one thing and then I'd come back next week and be like, 'Oh, I can take it here now,' or 'this is where it connects.' Or it was either that or I was watching someone else's face. And I was like, oh, wow, I really love what they did. Now I'm inspired. And now I can continue with my piece.”

The actors had to make a major adjustment to accommodate for the performance’s virtual format, Courtney said.

“It is really commendable to all the students in undergrad as well as graduates that come in with the notion of stage activity, performing live on stage, and then you have to put yourself in front of a lens. And you recognize that the lens is a little bit less forgiving,” Courtney said. “You can mask certain things on stage. But it's ironic that we're using the lens that doesn't allow us to mask as many things as we can. So this, in essence, is unveiling a part of our performance.”

Although a big transition, more virtual performances will likely occur in the future, Hines said.

“After this pandemic, people are going to be wanting virtual stuff continuously, even though we are face to face,” Hines said. “So it's a good way to get out there to promote yourself.”

To keep up with the Freedom Players and WSU theatre programming, check out the department website for updates.

Alanna Williams is a correspondent for The South End. She can be reached at alannawilliams@wayne.edu. Cover photo of a screenshot taken during the event.