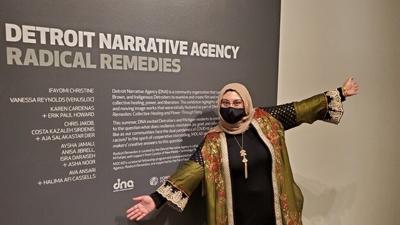 Wayne State alumna Aysha Jamali’s visual narrative “From Other to Center” is being featured in the Museum of Contemporary Art Detroit’s exhibition, “Detroit Narrative Agency: Radical Remedies,” from Feb. 5 to May 2.

Founded in 2019, “From Other to Center” is a project created by four Muslim women from diverse backgrounds, centered around themes of ancestry and identity. The other creators are Anisa Jibrell, Asha Noor and Isra Daraiseh.

Before being featured at MOCAD, Jamali said “From Other to Center” was shown at WSU’s Inaugural Diversity Conference. Soon after, it was submitted to the DNA to be shown in “Radical Remedies.”

Jamali said the goal was to build a sense of belonging and centering by drawing from their ancestral history.

“It’s a project and a space that we created as four friends who all identify as Muslim women,” Jamali said. “But we all also come from different backgrounds and experiences. Between the four of us, we’re Black, African, South Asian and Arab, and we just found a lot of symmetry in our stories.”

Jamali said she created the concept of “From Other to Center,” and filming and narration was done by all four women.

“Our identities are always compared to whiteness, and we wanted to be able to talk about our identities from our own perspectives and not in comparison to something else,” Jamali said. “We decided to see what we could do with these ideas and these conversations that we were having just as friends.”

Jibrell, co-founder of “From Other to Center” and Communications Director at Jibrell Family Relief Fund, said the visual narrative grew from conversations about the artists’ backgrounds.

“We were all having a conversation one night about cultural identity and how Western society has a tendency to box people of color into specific categories that dilutes our experiences,” Jibrell said. “The project grew out of these conversations because we saw a need in building a sense of connectedness by honoring our ancestral history and complex identities.”

Jamali said there can be a lot of pain around minimizing yourself to make your identity less complicated for others.

“Myself, I’m a visibly Muslim woman so a lot of people assume that I’m Arab,” Jamali said. “But I’m not Arab, I’m actually South Asian.”

Jamali said she hopes when people view “From Other to Center,” they explore who they are for themselves, and not for what people expect.

Jibrell said her role in “From Other to Center” was merging thoughts together into a cohesive message.

“Hearing the mash-up of our voices and the emotion behind our words was beautiful and I’m glad we were able to capture that,” Jibrell said.

As a Black Somali American Muslim, Jibrell said there’s no room for mediocrity in the art world for someone like her.

“Black artists must work twice as hard as non-POC artists to receive recognition,” Jibrell said. “It’s important to give Black artists the space and resources to express themselves unapologetically.”

“It was really well-made and showcased different cultures, how they question their past, and how that affects their sense of identity and individuality,” Elewa said. “One of my favorite parts was when they talked about their promises of what they want to draw from their culture.”

Elewa, who is Middle Eastern, Egyptian and Muslim, said she resonated with the disconnect of her own culture, yet tries not to lose it.

“I think people should view this exhibition because there are a lot of people, especially Americans that come from immigrant families that are living through an identity crisis,” Elewa said. “The American culture is so strong but also the culture that they come from is powerful as well. They need to learn how to embrace both.”

Elewa said she is glad to see a positive portrayal of Muslim women in the visual narrative.

“It also feels really good as a Muslim woman to see other Muslim women thriving in areas that they want to thrive in and having an impact on people’s lives at the same time,” Elewa said. “I think it’s very important for Muslim women to continue projects like ‘From Other to Center’ because it shows a level of representation that is somewhat lacking in America. It is 2021 and I still feel like we are underrepresented as a whole. Seeing Muslim women take part in projects like this can be inspiring for other women to follow their dreams and hopefully make a difference in people’s lives as well.”

Marisa Kalil-Barrino is arts and entertainment editor at The South End. She can be reached at artsandentertainmenttse@gmail.com.