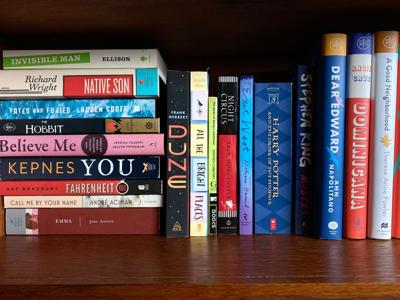 The COVID-19 global pandemic has brought uncertainty into many aspects of our lives. Seeking a break from the constant news cycle and stress of these times, many have turned to television, film, music and literature to provide a sense of comfort and entertainment.

WSU’s librarians are here to help your quest to explore the world of books, with recommendations of their favorite reads, along with tips on how to access free, digital-reading resources.

While WSU library systems are closed, it’s not keeping librarians from helping students find a great book to read.

Librarians Clayton Hayes, Alexandra Sarkozy, Amelia Mowry and others compiled a list of book recommendations, separated by subject and author, to help us battle quarantine boredom and blues.

Hayes discovered Baldwin through “The Fire Next Time,” arguably one of Baldwin’s most well-known novels, he said. Hayes recommends 18 works from Baldwin, which are all available online.

Hayes said the book is “a very eye-opening account of race and its place in recent American history.” This book led Hayes on a path of diving deeper into Baldwin’s works and expanding his worldview, he said.

One common theme among Baldwin’s books is identity and perspective, from the diversity in authors and subjects.

“The result for me has been, I hope, a more nuanced understanding of what other peoples experiences have been, but also an identification of the similarities — the shared human experience regardless of who you are or where you come from,” he said.

Hayes encourages students to be adventurous in their reading selections. He also recommends students use the wide range of free, digital platforms and databases that are available for social- distancing reading, such as local libraries, the Directory of Open Access Books and Project Gutenberg

“Say Nothing: A True Story of Murder and Memory in Northern Ireland,” by Patrick Radden Keefe

This nonfiction book describes the story of the 1972 kidnapping and murder of Jean McConville, a mother of 10 children from Northern Ireland.

The book provides “a really accurate description of what it was like to live in Northern Ireland at the time,” Mowry said.

The story described in this book takes place during the conflict between Protestants and Catholics in Northern Ireland. Mowry said reading about the historical developments in the book is educational and provides a framework for resolving issues in today’s world.

“I think it's a great way to understand not just history, but sort of the current political world we’re living in and how to make peace in communities,” Mowry said.

“The Night Circus,” by Erin Morgenstern

“The Night Circus,” which Mowry describes as magical realism, takes place in a fictional world where two magicians are in competition with one another.

This book shows “the only good use of second narration,” Mowry has come across, she said.

“Something about it pulls you in and even reading it feels magical.”

Butler’s work deals with themes of authoritarianism and racial inequality, with similarities being drawn between the fictional world and the current state of our world, Sarkozy said. During the COVID-19 outbreak, Butler’s books provide an opportunity to “give people something to read that gives insight without being dry and historical.”

This satirical comedy novel follows one man’s journey around the world, recounting his experiences and encounters.

According to Mowry this book appealed to her because of its lighthearted qualities.

“It's funny and I relate to this character so much,'' she said.

“Born a Crime,” by Trevor Noah

In “Born a Crime,” the late-night TV host describes his experience growing up as a biracial person during apartheid in South Africa.

The variety of backgrounds present in South African society is a noticeable theme in this book, Mowry said.

“He deals with a lot of just issues of growing up in this incredibly diverse culture where there are all different ethnic groups and languages,” she said.

Mowry recommends students read books from a variety of perspectives to reflect on their own perspectives as this book did for her.

WSU libraries have a "subject of the month." This month’s topic is gardening and was created by Sarkozy. Accessible from the libraries’ home page, this list compiles free, digital resources such as books, podcasts and articles about the monthly topic.

The full book recommendations list, compiled by WSU librarians, can be accessed at https://guides.lib.wayne.edu/bookrecommendations. Questions or book suggestions can be directed to Sarkozy at ff2662@wayne.edu.

Jenna Prestininzi is a correspondent for The South End. She can be reached at jennap@wayne.edu.