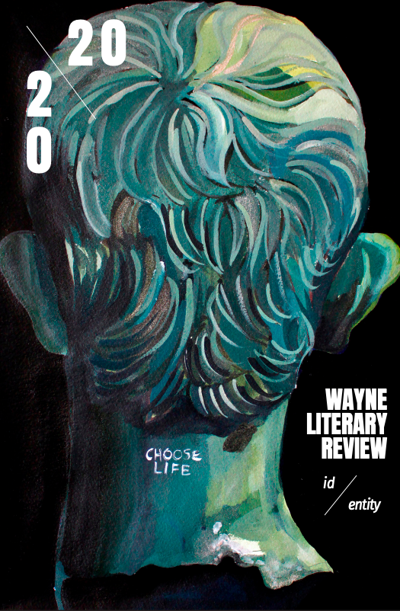 The Wayne Literary Review annually features the art and writings of current and former Wayne State students. The 2020 edition focuses on something central to all of us — identity.

Carrie Paveglio, public relations senior and 2020 editor of the Wayne Literary Review, said she chose the theme because she believes it’s an important issue for millennials and Generation Z.

“We’re very focused on identity as a whole, especially people in our age group,” Paveglio said. “I think a lot of people cling closely to their identities, which is obviously great because it offers you a form of community and a way to connect easily with other people.”

Each year, a different group of students are in charge of the review. This year, Paveglio and four other English majors – Olivia Yost, Olivia Johnson, Avery Zimmerman and Nicole Saez – are putting the collection together.

“When Carrie asked me to help, I immediately wanted to do it,” Zimmerman said. “The literary review is a great way to showcase student and community member talents, and I wanted to be a part of elevating their voices. Also I love reading all the submissions and compiling them. In a perfect world my dream job would be being an editor of things like this.”

Many of the writers discuss how their identity is attached to people, places and things, Paveglio said. Writers describe how their identity connects to an absence of something such as whiteness, straightness, belonging and many other areas.

Due to social distancing, personal ideas of identity and its importance may change.

“It'll be different depending on the identity and depending on the person, but I think with the situation that we're in now it is interesting to see kind of how those (identities) may adapt. Or if people may lean on their identities more or kind of let them dissolve away,” Paveglio said.

Since the early 1950s, the Wayne Literary Review has annually showcased the talented writings of current and former WSU students. Thumbing through past editions one will find plays, poetry, short stories, creative nonfiction — even painting and photography.

Professor Michael Liebler, Wayne Literary Review faculty advisor, has been involved with the review since 1983.

“It’s a completely student-run thing, it always has been,” Libeler said. “The rule has always been to remember it’s a student-run book, and your only job is to kind of keep it on track to get the issues out.”

Liebler said that a student-first submission approach was introduced in the 1990s. Prior to then, the review accepted national submissions with some issues containing only one to two pieces from WSU students.

The 2020 edition contains student works and some works by national artists, Paveglio said. Outside voices help provide a view of experiences that encompass different kinds of identity not found in student selections.

Paveglio hopes this year’s publication will show diverse works that connect to WSU and Detroit, she said.

“You really do learn a lot about students and just how varied and unique the experiences of people in Detroit and at Wayne State are,” she said.

“I think that's one of the things that makes Wayne State so special is obviously Detroit and how, you know, there's so many different communities and histories and people that have kind of grown and evolved here. So, it's interesting to see that expressed both in literature and in art.”

Keep an eye out for the digital copy of the 2020 Wayne Literary Review on WSU English Department’s Facebook and Twitter page.

Cover art by Gala Knörr and designed by Carrie Paveglio