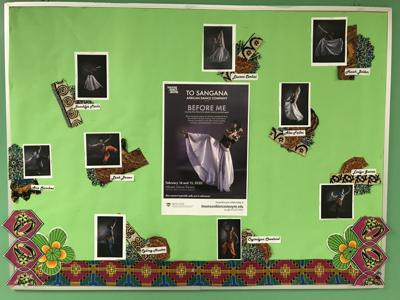 In celebration of African culture, the Theatre and Dance company at Wayne State is holding its annual To Sangana African Dance Concert on Feb. 14 and Feb. 15 at the Allesee Dance Theatre.

The concert is an immersive experience with the audience — including singing and drumming rooting from rich African culture, Artistic Director of To Sangana Karen Prall said.

“To Sangana means everyone is invited,” Prall said. “Because we're doing African dance, some people who are not African-American feel that maybe they can't do this and I want everybody to know that all people are invited to come.”

The company honors and celebrates the traditions of African heritage along with the African-American experience, according to their website.

“The show is composed of not only Congolese dance but also Afrobeat, modern, freestyle, singing and live drumming,” dancer Brooklyn Parks said.

The name of this year's performance is “Before Me.”

The dance company has been working on creating and rehearsing the show since the beginning of the year, Parks said.

“We recognize and honor how our different cultures and histories brought us to where we are today,” dancer Evie Gaines said. This is her first year in the company, and it’s been an incredible experience.

Parks created a close connection with everyone involved with To Sangana, she said.

“It’s amazing. I love dancing in the company. It feels like we are all family,” Parks said.

Clothing from Liberia will also be sold at the concert this year, Prall said. Sales will benefit the Liberian company that produces the clothes.

Prall said there’s typically African food at the concert. But this year, baked goods will be up for sale.

“People pre-ordered pastries which will be in our Congo Cafe but we were so busy this year that we do not have African food,” Prall said. “We will have pastries like sweet potato pies or vegan brownies that people can buy on-site too.”

Prall said she hopes that people will connect with each other at the concert in positive ways.

“In the end, the audience comes on the floor with us and we basically dance and party. So I want them (the audience) to come down at the very end and just dance and just enjoy themselves.”

Grace Reyes is a contributing writer for The South End. Grace can be reached at gracereyes@wayne.edu.