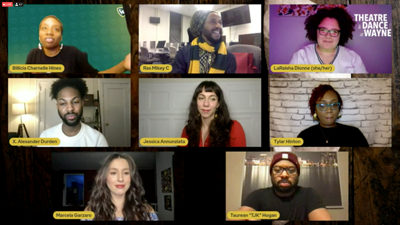 The Maggie Allesee Department of Theatre and Dance debuted its pre-recorded virtual performance titled “Unveiling the Mask” on Saturday, featuring 12 members of the Graduate Acting Company.

The performance addresses themes of identity, heritage and race, according to the event description. More than 20 individual segments were featured in the production, including monologues, songs, dances and comedic sketches.

“‘Unveiling the Mask’ is just taking off that cover that we wear every day,” said Billicia Hines, director and associate professor of theatre.

The actors produced their pieces alone, but were supported by a team of creatives, according to the event description. Stage managers, directors and designers helped to conceptualize the final performance.

Tylar Hinton, a costume design graduate student, served as the props master and costume designer/consultant for the performance. Hinton worked with students from the beginning and helped develop the characterization of each piece, said RAS Mikey Courtney, assistant professor in the theatre department and also assistant director of the performance.

“It was amazing to see the growth process,” Hinton said during the post-show discussion. “Working with each of these artists one-on-one was amazing.”

Each performer said they stepped out of their creative comfort zone for this project.

Michael Underhill, a graduate theater student, said he was challenged by filming and writing his performance.

“There's something so different and precious about the ability to perfect something to the nth degree,” said Underhill during the live post-show discussion. “There’s definitely a fear of letting it out of your hands.”

The goal was to challenge the actors artistically, Courtney said.

“The purpose of ‘Unveiling the Mask’ is for these students to delve deeper into a sense of themselves,” he said. “They've really explored how vulnerable they can be in their creative process.”

X. Alexander Durden, a graduate theater student, was one of the first actors featured in “Unveiling the Mask.”

“My vulnerability is my prize when I wear the mask,” Durden said in his monologue.

Other performers explored topics of race, religion, body issues, sexuality and authenticity. Their intense inward reflection was shown in their emotional and evocative creations.

Adam Graber, a graduate theater student, said he wrote his piece “I Am a Monster” on feelings of anxiety surrounding his sexuality.

“Everyone is a monster to someone, you can’t change that. But I can change how I feel about myself, I just have to say it out loud,” he said.

Hines and RAS emphasized the show’s power to “unite, create, and liberate,” they said.

A second version of the show will be performed by the Undergraduate Black Theatre and Dance Collective March 12 at 7 p.m.