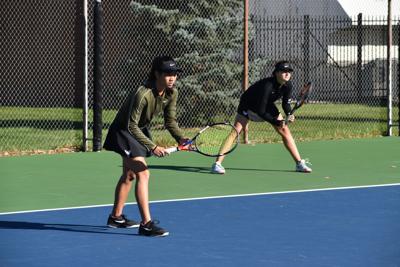 Wayne State women’s tennis — 9-0, 9-0 GLIAC — attempted to win the GLIAC Tournament for the second consecutive year when they began the conference tournament on Oct. 25.

WSU completed an undefeated regular season by defeating Ferris State University 7-0 at the WSU Tennis Courts on Oct. 20, giving the team its first regular-season title since 2014, and the number one seed in the upcoming tournament.

“They were relaxed but still hungry to win the two matches,” Moore said. “I don’t think there was too much pressure on them, but they knew they had to play well to continue the momentum that they had.”

WSU entered the season looking to replace two seniors from last year’s team. However, with most of the team returning, head coach Sheila Snyder said the team focused on getting the new players, freshman Sabrina Laynes and junior transfer Teodora Radu, settled into the team’s environment.

“The process started early in trying to get the two newcomers acclimated because it’s hard as two new people to come into a situation (where) you’re playing with eight people who have been on the team before,” Snyder said. “So I think the initial focus was trying to bring these two along to get where we left off last year.”

While the team entered the tournament as the favorite to win the title, Snyder said the team isn’t overlooking anyone.

“Everybody’s trying to win so hopefully we show up and play well, and compete,” Snyder said. “That’s all any coach can ask (for).”

WSU opened the tournament with a 4-0 victory over the Purdue University Northwest in the quarterfinals on Oct. 25, setting up a matchup with fifth-seeded Northwood University.

WSU defeated the Timberwolves 4-0 on Oct.26, advancing to the championship match against second-seeded Grand Valley State University on Oct.27.

In singles competition, Laynes (6-4, 6-2) and sophomore Carla Jewell (6-1, 6-0) posted straight-set victories. After dropping the first set of her match 4-6, Liong rebounded to take the final two sets, 6-2, 6-4 to end the match and clinch the title for WSU.

The win gives WSU its tenth conference title and the third under the conference’s current format.

WSU concludes the fall portion of its 2019-2020 schedule with a 12-0 record and a 7-0 conference record. The Warriors will resume competition in the spring.