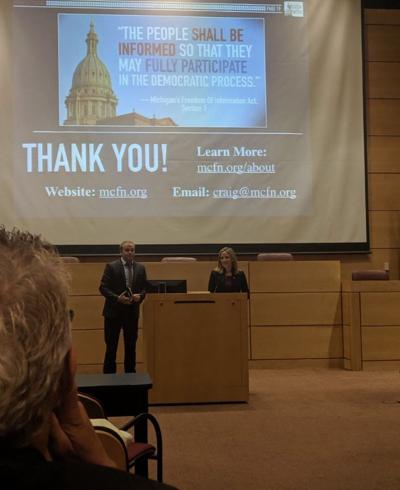 Benson, along with the executive director of the Michigan Campaign Finance Network, lectured on the rise of dark money in Michigan politics and the influence it may have. In the lecture, Benson brought up a comparative status of Michigan’s current campaign-finance laws to those of the rest of the country.

“For years, Michigan has consistently been ranked last by the Center of Public Integrity for its transparency and accountability laws,” Benson said.

“Michigan is one of the only two states that doesn’t require legislators to disclose any other source of income they may have or any other financial influence,” she said.

“These three friends intend to work each year with the law school to select a significant public figure to speak at this annual lecture on a topic of importance in the area of constitutional law,” Susan Cancelosi, associate dean of WSU Law School, said.

Benson gave her opinion on what is needed to mend the relationship between legislators and those they represent.

“In my view, if we are going to truly take seriously the importance of restoring the public’s trust in our democracy, we need to know some basic things about personal financial disclosure,” Benson said.

Along with Benson, Executive Director of the Michigan Campaign Finance Network Craig Mauger added on to the discussion. He spoke on the complex structures in place that makes tracing origins of dark money difficult.

“These are the kinds of connections you can’t make currently in this state,” Mauger said.  “We don’t have disclosures to show in a timely fashion where money is coming from.”

Mauger said it’s important to know where the money comes from because it affects elections.

“Having that information is key to making your decisions when you go to the ballot box,” he said.

According to Mauger, there is growing concern for the possibilities of dark money’s role influencing elections — specifically with who are using the money and the agenda behind it.

“If political parties can use this, who else could use this shield to prevent people from knowing where the money is?” Mauger said. “Perhaps a foreign government can use this, perhaps a corporation can use this.”

The Paul A. Rosen Constitutional Speaker Series Endowment is funded entirely through private funds, according to news release by WSU. For more information on the endowment, contact Carolyn Noble, 313-577-9238, or carolyn.noble@wayne.edu.