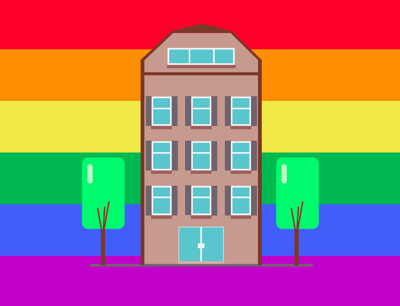 LGBTQ organizations and the Office of Housing and Residential Life are in the early stages of planning a space reserved for LGBTQ students in one of Wayne State’s residence halls.

This project involves the Queer Faculty and Staff Organization, the Joining Intersectionality, Gender, Sexuality, and Allies at Wayne and Queer Trans* People of Color student organizations, and the Office of Multicultural Student Engagement.

Kristin Johnston, an academic advisor for OMSE, said this initiative will provide safer and more affordable housing options for LGBTQ students at WSU.

“It’s our goal that every student that comes to Wayne is accommodated equitably — not just equally, but equitably,” Johnston said. “It’s our goal is to create something – hopefully for next semester — that makes housing easier for trans and non-binary students.”

Johnston said the initiative is still in its early stages and its unknown where this space will be assigned, or if it will apply to all housing on campus.

At a Nov. 8 Student Senate meeting, Director of Housing and Residential Life Nikki Dunham said students will be able to mark who they prefer to live with fall 2020.

JIGSAW president Teddy Auberle said living on college campuses can be dangerous for trans and non-binary students, particularly if they are matched with a transphobic or violent roommate. Some queer students decide to commute to their classes or pay additional money for single-occupancy rooms rather than move in with an unknown roommate, Auberle said.

Auberle said this initiative will give LGBTQ students a better opportunity to feel comfortable with their roommate.

“This will give trans, non-binary, and gender non-conforming students a way better chance of making sure their roommates are cool with them, and put a lot of work onto the end of the university, where it should be,” they said. “And let them get the best of both worlds, with the more affordable room type and an accepting roommate.”

According to the WSU Housing and Residential Life website, single rooms in residence halls are between $2,033 and $3,063 more expensive per academic year than double or triple-occupancy rooms.

Stable income can be problematic for LGBTQ people, reports the Movement Advancement Project.

The living and learning community will address the financial barriers to queer students in on-campus housing, Johnston said.

A living and learning community offers students the opportunity to live alongside other individuals who study similar majors.

Examples include the College of Fine Performing and Communication Art’s The Thompson Home where only students who are a part of CFPAC can live in, according to Housing and Residential Life’s website.

“That was one of the things that struck me the most,” she said. “Knowing that there are all these hoops that students have to jump through, and then after they jump through these hoops, having to pay more is not something that is equitable.”

Auberle said that they knew of only one transgender student who found another LGBTQ roommate at WSU, out of all the trans and non-binary people that they have worked with over the last 3 1/2 years.

“One of my friends ended up spending all summer, up until the two-week limit where you can no longer change rooms, trying to find another person who was looking for gender-neutral housing,” Auberle said. “She ended up getting a room together with another trans woman. That vaguely worked out in the end, but all of that was put on her. It was her job to find a roommate.”

Graphic by Guneet Ghotra. Guneet is the graphic designer for The South End. She can be reached at fz8387@wayne.edu