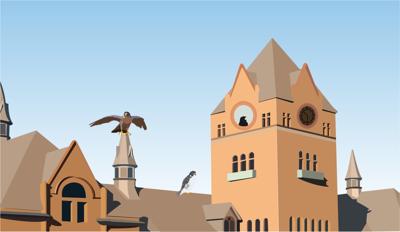 This story originally appeared in The South End's fall 2019 Back to School print edition.

If you find yourself wandering campus between classes this semester— wracked with stress over an upcoming exam or an essay due in a couple of days— there’s a good chance you might stumble upon the headless remains of a small bird.

Maybe it’s a pigeon or a blue jay, but don’t fret. It’s probably the lunchtime leftovers from Isabella or Freedom, Wayne State’s resident peregrine falcons, who since 2016, have carved out a small midtown domain for themselves centered around the eastern balcony of Old Main.

“People are always sending me pictures of dead birds,” said Michelle Serreyn, WSU biology lab coordinator. Serreyn helps monitor the birds with Detroit’s Department of Natural Resources. “It helps because I can track what they’re eating a little. They tend to lop off the heads when they bite the neck to stop the bird from moving. Last year we found a lot of wings.”

Of course you no longer have to strain your neck looking up to try and catch a glimpse of Isabelle or Freedom —all you need is your phone or laptop.

That’s because since March 2019, WSU’s Department of Biological Sciences in conjunction with the College of Liberal Arts and Sciences have set up a 24/7 livestream camera so students and the public can satisfy their curiosity and take a peek into their lives.

Serreyn said one of the many things that makes peregrine falcons so fascinating is their ability to reach speeds as fast as 200 miles-per-hour when hunting their prey, as well as their tendency to settle in urban environments.

“They’re the fastest animal on land if you don’t count the fact that they really aren’t moving. They’re just dropping through the air,” Serreyn said. “In the wild, they tend to be cliff dwellers. They’ll set up nests in high areas and scan their territory for birds because that’s what they eat, then they get above the birds and drop down on them from the air. They wouldn’t normally be in this area, but because urban environments provide lots of high areas for them to perch, they’ve adapted.”

The idea to set up the webcam came from Jessica Archer, the associate director of marketing and communication for CLAS and Mel Mills, CLAS’s web content administrator. Archer and Mills said they were inspired to install the cameras after watching YouTube videos of April, a giraffe at Harpursville — New York’s Animal Adventure Park — who became a viral sensation after a livestream to watch her giving birth was set up June 2019.

“We thought it would be a good project to help generate interest in the falcons, and really more than anything would be fun to watch,” Archer said.

The camera wasn’t easy to set up. Considerations had to be made to find the right time not to disturb the falcons and there were plenty of technical issues, according to Mills and Serreyn.

“The camera was originally installed around March, and it went live but they were testing it and it stopped working,” Serreyn said. “And when we finally got the new camera working Isabella was already on the site nesting and we didn’t want to disturb her so we held off putting the new camera up, and once the babies were hatched the DNR coordinator said, alright, they’re not likely to leave the nest, let’s jump out and try and get this back up and running, but at that point we had already missed the beginning part of their life cycle.”

Archer and Mills said they hope by next year the kinks will be worked out and students will be able to watch Isabelle and Freedom’s hatchlings from birth all the way to when they leave the nest to migrate and start their own families. They  hope to set up movable cameras along the balcony so people watching the livestream will be able to get a better view of the hatchlings as they wander around the nest.

“It’s always frustrating when the babies walk out of frame,” Archer said.

This year, Isabella and Freedom gave birth to two hatchlings, Woodward—who was officially named in a contest on Twitter after he fell from the nest and had to be rehabbed by a falconer working with DNR (falcons are only given names when they are officially tagged, according to Serreyn)— and Aretha, who was unofficially named after Detroit’s “Queen of Soul” who died in August 2018.

Serreyn said while she has affection for the falcons as a whole, she tries not to become too attached to individual birds because she understands survival can be a tricky business.

“In the course of the first year, the survival rate is about 30 percent, and that’s typical for small birds across the board,” Serreyn said. “Partially because they will get sent out on their own in the fall. So they need to find a place to shelter and find food before winter hits and a lot of them don’t make it past that point. If one of ours crosses into the territory of another pair they run the risk of being attacked.”

Archer and Mills had a different take.

“I was in the office doing a training on web accountability and had the stream up in the background on my computer,” Archer recounted. “All of a sudden I glanced up and watched one of the babies walk off the ledge of the balcony. I nearly had an anxiety attack and immediately started texting Michelle to see what I should do but I think she just thought I was crazy.”

So far, the feedback from people interested in the livestream has been very positive, Archer and Mills said.

“I’m hoping, if it gains momentum, I’d like to try to petition WSU to change our mascot to a peregrine falcon,” Mills said. “We’d still be the warriors, but maybe instead of ‘W’ we could use the falcons instead. I just think it’s cool because the falcons are here and have a story.”

In the meantime, Archer and Mills said they are happy the livestream is helping to generate interest in urban wildlife.

“I hope we can get people to notice these things,” Mills said. “There’s nature all around us, even in the city. It’s easy to forget it but when you take an interest in it. It changes your perspective.”

Sean Taormina is the features editor at The South End. He can be reached at sean.taormina@wayne.edu.

Graphic by Guneet Ghotra. Guneet is the graphic designer for The South End. She can be reached at fz8387@wayne.edu

Many can also run, jump, swim, and dive. Some, like penguins, have lost the ability to fly but retained their wings. Birds are found worldwide and in all habitats. The largest is the nine-foot-tall ostrich. The smallest is the two-inch-long bee hummingbird.

Many can also run, jump, swim, and dive. Some, like penguins, have lost the ability to fly but retained their wings. Birds are found worldwide and in all habitats. The largest is the nine-foot-tall ostrich. The smallest is the two-inch-long bee hummingbird. https://www.jopestkil.com/