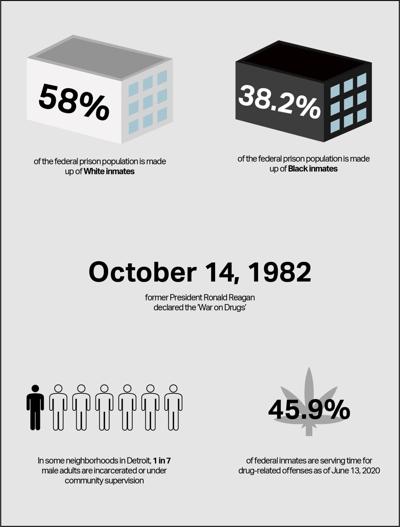 The United States has the highest prison population compared to all other countries, according to the World Prison Brief, which collects and provides prison information from around the world.

As protests against police brutality and calls to defund the police continue, the prison system is also a part of this conversation. Several Wayne State criminal justice instructors say policies throughout history have negatively impacted communities.

“Mass incarceration is a blight on the U.S. It tears families apart and contributes to the permanent underclass we have in this country,” said Harold Geistman, a WSU criminal justice lecturer. “The collateral consequences of imprisonment follow a person throughout his (or) her life and greatly limit their life choices. Often, they return to crime as a way to survive.”

“The current idea of defunding the police would put money out there for social services as well as other community services so that police would not be called,” Geistman said. “When they are called, they often criminalize activity and make an arrest where treatment or hospitalization is needed.”

Mass incarceration in the U.S. has roots tied to racism and slavery, said Laura Starzynski, a WSU criminal justice lecturer.

The 13th Amendment to the U.S. Constitution abolished slavery in 1865, but with a stipulation.

“When the 13th Amendment ended slavery, it was also written that people could be forced to work for free if they were prisoners,” Starzynski said. "In many areas where slavery had been the cornerstone of the economy, they still needed free labor, and with the racism of the time, wanted it from Black people."

In the 1980s, the public began to believe the U.S. criminal justice system was not doing enough to solve crime problems, Starzynski said. This led to a demand for longer sentences, especially for drug crimes.

In 1971, President Richard Nixon declared a war on drugs and said drug abuse was “public enemy number one,” according to History. He proposed mandatory prison sentencing for drug crimes.

“This was lucrative both financially, and vote-wise for politicians, and our prisons filled with people convicted of drug crimes,” Starzynski said.

As of Aug. 22, 46.2% of federal inmates are serving time for drug-related offenses, according to the Federal Bureau of Prisons.

At an NAACP convention in 2015, Clinton said “I signed a bill that made the problem worse and I want to admit it,” according to MSNBC.

The white population in America is estimated to be over five times larger than the Black/African American population, according to the United States Census Bureau.

"Policies at the foundation of mass incarceration devastated Detroit,” he said.

One in 25 adults in Detroit are under some form of correctional control, according to a 2009 report by the Pew Research Center.

“Even worse, in some neighborhoods, 1 in 7 male adults are incarcerated or under community supervision,” Larson said. “Needless to say, the carceral state affects every layer of fabric in the city, overwhelmingly in negative ways.

“If we solve the problems that lead to crime, we won't need that money to arrest and incarcerate people after they've already committed a crime," she said.