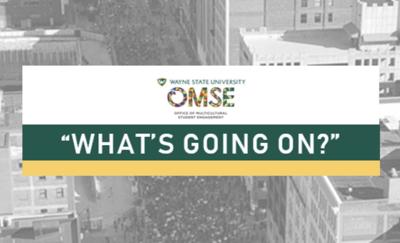 On top of battling the COVID-19 pandemic, outrage has struck every corner of the earth due to the killing of George Floyd at the hands of four police officers in Minneapolis on May 25.

Floyd’s death, which follows countless other Black lives taken by law enforcement, has sparked a broader conversation on systemic racism and police brutality, both in the United States and abroad.

Wayne State’s Office of Multicultural Student Engagement brought this global conversation to the campus community with the “What’s Going On?” series, which began on June 10. Named after the popular Marvin Gaye song, the virtual workshops are designed to address racism and educate people on steps that can be taken to effectively support the Black community.

“As we continue to witness injustices in our country due to systemic racism, we wanted to provide additional outlets and opportunities to engage the campus community,” OMSE Assistant Director Stephanie Hawkes said.

This series aims to build off of dialogue circles hosted by the Office of Diversity and Inclusion, which provides a space for people to listen to each other and process emotions, Hawkes said.

“We wanted to keep the momentum going after these talks to provide sessions where people could expand upon some of the themes that often emerge in them,” she said.

Hawkes said OMSE felt compelled to not only join the fight for Black lives, but also educate students and faculty on numerous aspects of this struggle.

OMSE Academic Advisor Kristin Johnston said she is looking for the series to create understanding across race, encouraging others to become active members of this movement.

The program, including Johnston’s session held on June 11, is personal to her, she said.

“This series means a great deal to me,” she said. “My session ‘Hi, Black Friend, How Can I Help?’ (was) about how to marry anti-racism work with normalizing Black lives and Black voices. I (gave) tangible ways to normalize Black voices in everyday life.”

“My plan for this session is to discuss the difference between actor, ally and accomplice, when it comes to racial justice and social justice in general, so that people understand not only where they stand, but what different levels are,” she said.

The Black Lives Matter movement is far from over, and organizers said they hope the series will help all participants learn how to support and stand for Black people.

Paris Brown, a criminal justice major and African American studies minor, said she thinks “What’s Going On?” is fostering important conversations. The June 17 workshop on microaggressions is one she said she thinks many at WSU can learn from.

“Ithink ‘Magnifying Microaggressions' is most needed and will be impactful because WSU’s population is 15% African American,” Brown said. “We make up the second-largest portion of the population. It is important to learn how to identify microaggressions within self, and call out friends or peers and microaggressive statements that can be made.”

At a time like this when tensions are high and rivalries begin to form, it is easy to forget that people are still growing, Zanardelli Sickler said. She said she thinks her ability to teach will make her more relatable and allow for more comfort in this unique learning environment.

“Not everyone, and this includes, you know, all backgrounds, is really comfortable talking about race relations and social justice,” she said. “And so if I can come in as just a regular person and say, ‘I don't have the answers, but I will help you find them,’ I mean, learning is my job, right? I teach people how to learn. This is part of that.”

OMSE stands for diversity and inclusion, Hawkes said. She encourages everyone willing to learn to attend the sessions that will be held in the coming days.

“Everyone has knowledge and truth within them that’s worth sharing,” she said. “Sometimes I think we get too tied up in being an expert or knowing all the answers. We aren’t perfect, and we shouldn’t aim to be.

“But by opening up the floor to discuss topics honestly and making commitments to being better, I think we can move towards creating a campus, and a society, that truly respects and values all people.”

Alanna Williams is a contributing writer for The South End. She can be reached at alannawilliams@wayne.edu