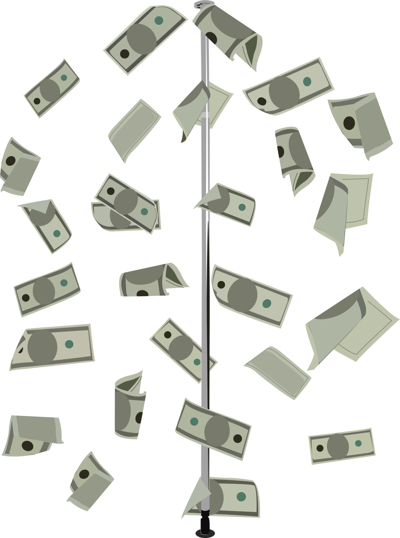 Stacy and Lauren chose to remain anonymous throughout the story to protect their identities.

Stacy, a Wayne State public relations major, can remember the day she was first introduced to the idea of sex work.

While trying to find toilet paper in a cupboard under the sink at a family friend’s house, 14-year-old Stacy came across something that would alter her life. Stacy found herself flipping through poorly hidden Playboy magazines and old pop erotica novels from the 50s and 60s. She said that she tried to go through everything as fast as she could so nobody would find out.

“I was so fascinated,” she said. “Ever since then I would just think about it constantly. I loved the pictures — didn’t read the articles.”

Growing up watching older movies, Stacy became mesmerized by the glamour and the sex appeal of starlets like Rita Hayworth and Brigitte Bardot.

Before she decided to go into sex work, Stacy said her original plan was to be a professional ballet dancer.

“I did ballet for 12 years and I got injured when I was 16, so I had to quit,” Stacy said. “My original plan was to join a professional dance academy and do ballet for a living and then do choreography, but it just didn’t work out. After graduating high school I took a year off and got four different surgeries, and while I was recovering from the last one I really started to think about my next move. Sex work was always in the back of my head.”

“I did a lot of lesbian scenes, I did scenes with guys, nothing really too hardcore or intense. I really wanted to work with Kink. com but that never really happened.”

After some problems with her apartment, Stacy said she decided not to renew her lease and move back to Michigan from California. When she got back, she enrolled in college and began doing cam work on the side to pay the bills.

The intimate nature of cam work causes some of her clients to try and build relationships outside of her work, Stacy said.

“In reality, I’m doing what I consider to be work and that they’re consuming it and paying for it,” Stacy explained. “Some people think you’re interested in a relationship. You always have to make sure not to cross that line.”

She tries to cam every day for about four or eight hours, giving her the flexibility to study and go to class. But she said she still experiences work and life conflict.

Not everybody who’s a student sex worker goes into the industry for the same reasons.

This is Lauren’s first year of not being in school. After attending WSU last year for communications, she left after struggling with mental health and learning disabilities. She became a stripper for a semester to make money during her parent’s separation.

“I don’t personally see it as immoral or anything like that,” she said. “I actually really liked it when I started — it was a lot of fun.”

However, on top of issues with her mental health, she found herself drinking more and sleeping less while being a sex worker and student. This decline in her mental health led her to do poorly in school. She said a lack of support from WSU’s mental health services is what made her drop out of school.

More recently, Lauren has been feeling burnt out after 11 months of stripping.

“I’ve had to remind myself to just kind of think positively because you really do see the worst of people sometimes,” she said.

Lauren found she was perceived differently when she told her clients she was a student. They viewed her as a worker rather than a sexual object, she said.

Her experiences made her realize the privileges her background afforded her.

“I grew up with two parents who were able to send me to school,” she said. “I find it kind of screwed up because the only reason I’m in school is because I started off in a place of privilege.”

There is also an unnerving lack of protection from authority, especially in the strip club, Lauren said. Lauren recalled a time when a woman was crying in the locker room after being strangled by a customer for turning down their solicitation for sex. The security guards ignored her request to check the cameras.

“No one fights it because it’s just not a fight you’re going to win,” Lauren said.

Along with issues of security, Detroit strip clubs make strippers pay “house fees” for the space they use, she said.

“I have to pay to work there, so I have to pay a tip out to the DJ and house mom,” she explained. “But if I go and use a private booth because I do lap dances for someone, I’m also asked to pay a minimum fee — sometimes $50 at some clubs.”

Some clubs even make you pay if you’re late or want to go home early, Lauren said. Stripping is easy to start but hard to quit, she said.

While applying for jobs outside the industry, Lauren said she doesn’t want to put stripping on her resume, but she’s concerned about the five-year gap.

“What if I do get hired and then they find out and fire me,” she said.

She wonders if she will have any legal rights in that situation.

The murky laws around sex work make it difficult for both workers and consumers to navigate. Some advocate for decriminalization of sex work, but argue purchasing should remain illegal. Others say sex work should be decriminalized but regulated.

Stacy said people should listen to what sex workers want instead of imposing their beliefs on them. She feels sex work and consumption should both be decriminalized and not federally regulated.

“A lot of people are pushing for the Nordic Model or End Demand, which is where the purchasing of sex work remains illegal but sex work is legal. It’s complete bullshit,” Stacy said. “It reinforces the idea that doing and consuming sex work is bad. That’s like saying it’s legal to make cookies but illegal to eat them. The idea makes zero sense to me.”

In 2018, congress passed the Fight Online Sex Trafficking Act and the Stop Enabling Sex Traffickers Act. Advocates argue that while these bills may protect sex trafficking victims, they unintentionally make it much harder for sex workers to do their jobs by censoring and shutting down websites sex workers use to communicate.

Zee St. James, a former WSU student, who works as an escort and advocate for sex workers’ rights, said sex work is becoming less safe because of bills like FOSTA and SESTA.

“The internet is a really important safety tool because if you’re a sex worker — like a lot of people who are on Backpage — that was the only thing keeping them from working on the street which could be a lot more dangerous,” St. James said.

These bills have affected St. James personally as an escort. They’ve had months where they’ve had to do things that weren’t safe, St. James said.

“We use the Internet to talk to each other and to give each other resources, so whenever that’s under threat, it makes it a lot scarier,” St. James said.

For students interested in pursuing sex work, whether as side hustle or career, Stacy said it’s better to view it like any other job.

“Finding the time to work, go to school, do homework and study, take care of myself, be social and everything else is overwhelming,” Stacy said. “You probably won’t make six figures, it takes a lot of self-motivation and consistency. Be yourself, don’t do whatever is popular, find your niche and be okay with people knowing.”

As the stigma around sex work begins to fade, Stacy said that instead of ending the demand for sex, people should be taught how to engage in sexual relationships in healthy and consensual ways. This includes consuming services from sex workers.

“Exchanging companionship and/or sexual services for money appeals to a lot of people for many different reasons,” Stacy said. “For the most part, people want their physical needs met without having an emotional relationship — and that’s totally understandable.”

Emily Roth is a contributing writer for The South End. She can reached at emily.roth@wayne.edu.