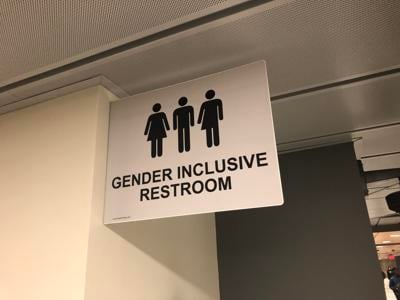 This article originally appeared in The South End's fall 2019 Back to School print edition.

When looking at the Wayne State campus map, there are gender-neutral bathrooms located in the Student Center and the residence halls. They are marked for students who need access to these bathrooms, but these students typically find the bathrooms locked or inaccessible.

“Before I attended orientation, I saw that there was a map of all the gender-neutral bathrooms,” Auberle said. “I remember there was a marker in Towers Residential Suites. I assumed it was for the bathrooms on the first floor, which are the only open, available restrooms where anyone can walk in. It was not, unfortunately. I asked someone at the front desk, and they said, ‘No, those don’t exist in here.’”

“Either the campus map is referring to the staff bathrooms on every floor, which is locked at all times, or the bathrooms in people’s rooms, which is awkward and weird if you don’t live in the building,” Auberle said.

According to WSU’s campus map, there are 50 gender-neutral bathrooms located on the Detroit campus. A few are located in the Student Center and residential halls such as The Towers Residential Suites, Yousif B. Ghafari Hall and Leon H. Atchison Hall.

Auberle said the Student Center is the only building on campus with accessible gender-neutral bathrooms in it.

“If the gender-neutral bathrooms are always locked, it’s not accessible, because then you have to ask someone else to do it for you, and that’s putting yourself at risk. You’re saying, ‘Hey, I don’t fit into the gender binary, you have to accommodate for me,’” Auberle said. “The risk that comes with outing yourself to an unknown entity is huge. Just because someone works at a place doesn’t mean they aren’t transphobic or likely to become hateful or violent towards you. Every time you come out there is that risk – especially when you don’t know the person.”

Associate Provost for Diversity and Inclusion Marquita Chamblee said she was unaware students say the gender-neutral bathrooms in the residence halls are locked.

“A small group of staff, faculty, and students met late last spring to discuss updating the signage for all gender-inclusive restrooms – apparently there is inconsistency in the signs Gender-neutral bathrooms inaccessible for students that we need to correct,” Chamblee said. “The map needs to be updated and we need more information collected about the accessibility of restrooms at each location. We also began discussing how to make more gender-inclusive restrooms available in various classroom buildings.”

She said she will reconvene and expand the group to continue the conversation this coming fall.

Chris Rader, associate director of residence life, said they’ve been intentional with creating housing that does not include gender-specific bathrooms. The current on-campus residences don’t have gender-neutral bathrooms.

“The on-campus residence halls and apartments do not feature publicly accessible gender-inclusive bathroom facilities as they are secured 24/7 and not considered public buildings,” he said. “At this time, we have not explored additional gender-inclusive restrooms, but they may be a consideration in future renovations.”

Auberle said not having gender-neutral bathrooms forces transgender, non-binary and genderqueer folk to limited and risky choices. Auberle said having access to bathrooms is a basic human right.

“If you don’t have gender-neutral bathrooms, you’re forcing every single trans, nonbinary and genderqueer person to either choose a gendered bathroom that is inauthentic to them and who they are and possibly be harassed because of that or go somewhere else,” Auberle said.

Zachary Marano is contributing writer for The South End. He can be reached at zacharymarano@wayne.edu.