Have you ever made an observation, had a strange thought or confession about Wayne State that you wanted to get off your chest and share with as many people as possible?

No worries, @WSUConfessions4 on Twitter has taken it upon themselves to help you vent everything from your most absurd thought to your most recent embarrassing secret, all with the safety of anonymity.

The account first began tweeting in February 2019, with its debut confession being: “One of my professors wasn’t that good of a teacher. The entire class failed one part of the exam because he didn’t teach us. We emailed the dean & he no longer teaches at WSU. Lowkey feel bad lmao.”

The person behind the account said they were inspired by similar accounts started at other universities.

“The thing that made me start the account was I saw the Central Michigan University confessions account, and I was like ‘oh cool, I wonder if WSU has one,’” WSU Confessions told The South End. “I searched for one, but all I could find were dead accounts so I was like ‘OK, I’ll start one if there isn’t one.’”

The person behind @WSUConfessions4 said they prefer to remain anonymous because it makes it easier for people to send their confessions to “someone without a face,” and simply because they don’t want people to bother them in person.

Of course, while anonymity can allow for people to share thoughts and experiences they wouldn’t otherwise, without fear of any kind of social reprisal, it can also lead to people confessing things that were a bit too risqué, WSU Confessions said.

“It was a lot of people taking advantage of the fact that no one knew who they were and I would take the fall. I made a set of rules. 1. No Sexually Transmitted Diseases. 2. No criminal charges. 3. No personal attacks. 4. No racist sh*t. 5. No political sh*t.”

While they aren’t sure exactly how many confessions have landed in their inbox since they began the account, they put the amount somewhere over 500.

With 873 followers and counting, WSU Confessions said they’re prepared to keep curating student’s confessions for as long as they can.

“I sometimes ask myself why I do it still—what’s the point,” WSU Confessions said. “But sometimes I get to talk to someone that is going through a bad time and sort of help them through it.”

Here are some of the confessions sent to the account: 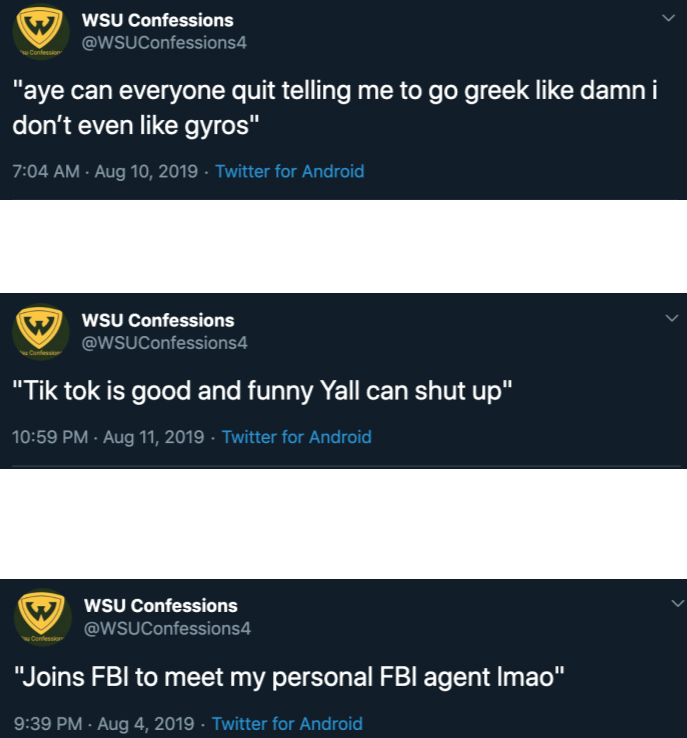 Sean Taormina is The South End’s feature editor. He can be reached at sean.taormina@wayne.edu.