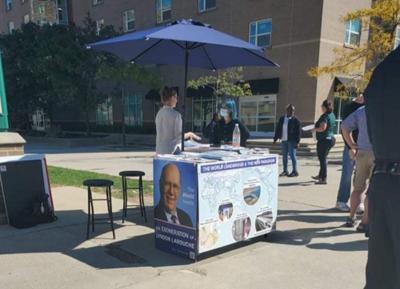 The LaRouche Organization appeared on campus on Sep. 15 and Sep. 29, with a display many viewed as antisemitic.

There is not a legal avenue WSU can pursue against the LaRouche Organization, said WSU’s general counsel Louis Lessem.

“What they did was highly distasteful stuff, but probably not something that would be prohibited,” Lessem said. “It wasn’t on our property. We don’t have any control over what people do on other property other than our own.”

The LaRouche organization set up its display near the corner of Merrick Street and Anthony Wayne Drive, outside Yousif B. Ghafari Hall, on Sept. 15 and Sept. 29.

A difference of a few feet marks an invisible barrier between WSU and city of Detroit property, said WSU Police Chief Anthony Holt. Where the organization set up in this area affected the legality of their presence.

Holt said the display was set up on WSU property on Sept. 15, when WSUPD officers informed the LaRouche Organization that they are legally allowed only on city of Detroit property. The organization moved and then left shortly after.

Jewish Student Organization member Jenna Friedman saw the display on Sep. 29 at 3 p.m., she said. Though she said her conversation with the LaRouche Organization representatives was not fruitful, she wanted the university to be more proactive on this issue.

“Even though I was offended, I was willing to have a conversation with them. I was curious about their rationale, but they (LaRouche Organization) weren’t open to that kind of dialogue,” Friedman said. “I think condemning antisemitism is the bare minimum of what we should do. It (Dean of Students David Strauss’ statement) wasn’t as specific or direct as I would have liked it to be.”

Associate Professor of journalism Fred Vultee said he urged WSU and the public to be careful when considering what kind of response they would like to see from WSU.

“My view of what Wayne should do is really tangential. That said, the important thing to consider there is viewpoint discrimination,” Vultee said. “Are you going to choose which speech to protect whether you agree with it? We have to be careful, because if we leave that as a political decision, it’s just as likely to go against your viewpoint as in favor of it as well.”

“As it’s come to evolve, the kind of speech that gets the highest protection is political speech because the whole point is to encourage people to speak their minds about matters of politics and self-governance,” Vultee said. “Out of that free speech may come conflict but also some good ideas.”

“I support free speech and it’s important. It happened near the campus and WSU has a job to protect its students physically and emotionally from harm,” Friedman said. “I think something can fall under free speech, but it can still be hate speech. Just because you have a right to do it, doesn’t mean you should be doing it.”

Vultee and Lessem said they believe the best solution to this issue is for students to use their free speech to counter the displays. Following the previous incident, Strauss also said he encourages such a response.

“But the historic American remedy for this is counterspeech,” Vultee said. “The whole public square concept applies in most scenarios like this.”

The concept of the public square dates back to Marsh V. Alabama in 1946, according to The Free Speech Center at Middle Tennessee State University. The Supreme Court ruled that individuals handing out religious literature on public sidewalks are protected by the First Amendment.

Lessem said he believed the LaRouche Organization acted inappropriately but WSU was not required to interfere.

“The answer is not ‘who has the bigger stick?’ The law should apply to all, so if they want to make fools of themselves on public property, then the rules governing the public property govern them,” Lessem said. “Punishing them would feed into their hands.”

Cover photo of a Sept. 29 LaRouche Organization display at WSU by Jenna Prestininzi, editor-in-chief of The South End. Prestininzi can be reached at editorinchieftse@gmail.com.