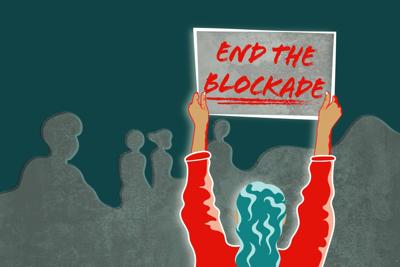 Activists with the Yemeni Liberation Movement organized a 23-day hunger strike to raise awareness about the ongoing crisis in Yemen in April.

The ongoing civil war in Yemen has killed hundreds of thousands of civilians, and caused economic destruction, famine, disease and displacement, according to the New York Times.

Wayne State alumna and YLM organizer Iman Saleh said the hunger strike was the result of conversations within the YLM.

“We discussed about what we could do to really put some pressure and bring awareness on the blockade and Yemen,” Saleh said. “We felt that a hunger strike was not only the most appropriate action to show solidarity with the people of Yemen but also the most radical one.”

Saleh said throughout the hunger strike, she tried to focus attention on the involuntary starvation of Yemenis. Over half the country’s population is food insecure, according to the United Nations World Food Programme.

“I feel like that sort of protest is very effective at bringing attention because petitions are not as effective in my opinion,” Jobeh said.

“When we started this hunger strike it just felt like an extreme violation to our bodies and so when we talk about hunger strikes being non-violent, well non-violence to who exactly?” Saleh said.

“I think it’s really critical that we uplift her (Iman) in what she’s trying to do because she doesn’t feel like enough is being done around the country and there’s not enough people that know,” Tlaib said.

The Saudi-led military coalition instituted an air and sea blockade on Yemen in 2015, according to the Middle East Eye. This has prevented supplies such as fuel from entering Yemen.

The blockade limits the ability to transport resources and restricts power to hospitals and other buildings, Saleh said.

The Biden administration has denied the existence of a blockade, CNN reported.

Saleh said the U.S. should be more transparent in addressing its role in the blockade.

“I’m glad that President Biden restored humanitarian aid to northern Yemen, but the fact remains that without fuel, that aid will not get to the people who need it,” Tlaib said. “While the blockade continues, all the president’s words on this issue are only that, words.”

U.S. Special Envoy for Yemen Tim Lenderking called for Saudi Arabia to end the blockade on May 7, according to Middle East Eye.

On April 13, Tlaib met with YLM organizers outside the White House, according to her Facebook page.

Tlaib said visiting the activists in Washington D.C. was a powerful experience.

“There was not a dry eye there,” Tlaib said. “If anything for me it became very real to see that kind of emotion and desperation of making it stop and you can hear it in their voices that they just want people to pay attention about what’s happening in Yemen and it hurts them to think that it could be prevented if we do more.”

The activists were dedicated to preventing suffering, Tlaib said.

“It was very personal for them. You can hear it in their voices and tears were coming down their faces that they really are trying to save children, innocent children from starving to death,” Tlaib said.

“If you just look at his words and actions, it’s just basically him rebranding the war,” Saleh said.

“Yemen and the Yemeni people have the most caring and generous heart. Even through the hardest times and the most difficult challenging moments, they’ve always had that smile on their face,” Jobeh said.

Saleh said she urges the U.S. government to end its involvement in the war in Yemen.

“To the Biden administration, ‘you have come back full circle with blood on your hands… What power do you gain from starving children to death? At what cost of human lives must happen before this war actually ends?’” Saleh said.

Observing the crisis from abroad is hard, but Jobeh will continue advocating for Yemen, she said.

“It’s difficult to see your own people struggling and it gets really emotional sometimes, but I always try to be very hopeful that it will get better,” Jobeh said. “I’m going to keep pushing for the Biden administration to do better for Yemen.”

The U.S. must hold regional powers accountable for their roles in harming Yemenis, Tlaib said.

Tlaib said she is committed to continuing her advocacy for Yemenis.

Saleh said participants took a pause from the hunger strike to observe the holy month of Ramadan, but YLM activists would re-evaluate next steps to continue their work for Yemen.

There is not a linear path to freedom, Saleh said.

“The idea of liberation is an ongoing struggle, and people can experience liberation at any point, even during oppression,” Saleh said.