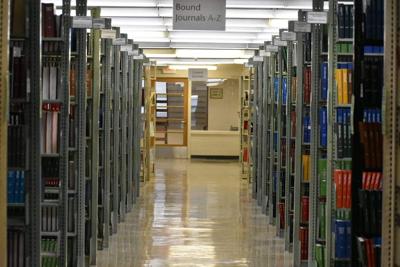 It’s National Reading Month, and if you’re still searching for a book to read, Wayne State librarians have come to the rescue, sharing some of their all-time favorites.

“The Phantom Tollbooth” by Norton Juster

Allison Greenlee is in charge of cataloging for the WSU Library System. She specializes in the description of rare material and has been working at WSU for two years. Greenlee’s favorite book is “The Phantom Tollbooth” by Norton Juster, illustrated by Jules Feiffer.

This book is about “a boy who thinks everything is boring until he drives through a mysterious tollbooth that appears in his room one day,” Greenlee said. “There he embarks on an adventure and discovers how learning can be.”

The children’s fantasy is Greenlee’s favorite book because she always thought it was clever. She has childhood memories of her mother reading it to her and her brother on long road trips, she said.

Greenlee compares the text to an updated “Alice in Wonderland.”

“It’s the first thing I remember reading that was witty yet imaginative, and it made things like grammar and math seem fun,” she said. “I encourage people to read this book because it is a good reminder to think critically, reexamine what you thought you knew and look at things from a different perspective.”

“The Catcher in the Rye” by J.D. Salinger

Jared Quist, a graduate student assistant at the Purdy/Kresge Library, said “The Catcher in the Rye” by J.D. Salinger is his favorite book.

The classic, renowned book is about a boy named Holden Caulfield, who abandons his prep-school after fighting with his friends.

“Caulfield is kind of an unreliable narrator and you follow him on this journey,” Quist said. “Caulfield goes to New York City and goes on all types of adventures throughout the book. The way the author (writes) his journey is really interesting.”

Quist says he encourages people to read “The Catcher in the Rye” because it offers interesting perspectives on different personalities. It teaches life lessons such as empathy while also being an enjoyable, relatable read, he said.

“Pride and Prejudice” by Jane Austen

Katie Iverson, a graduate student assistant at the Purdy/Kresge Library, says her favorite book is “Pride and Prejudice” by Jane Austen.

“This book is about a young woman who is very independent, living in a specific time, where women are expected to marry,” Iverson said. “She doesn’t really want to marry, but there are a few love interests involved. She watches her friends and sisters go through the same thing.”

Iverson says she doesn’t get tired of rereading the book.

“I encourage other people to read this book, although it's not for everyone,” she said.

“The Historian” by Elizabeth Kostova

Aliki Mitsiopoulos is a graduate student assistant at The David Adamany Undergraduate Library. Her favorite book is “The Historian” by Elizabeth Kostova.

“This book is my favorite because it has a cool mix of historical fiction and fantasy. It’s really detailed,” Mitsiopoulos said. “The Historian tells the history of Vlad Tepes (Dracula) and the modern story of Paul, a professor, and his sixteen-year-old daughter on their quest to find Vlad's tomb.”

This fantasy combines the mythology of vampires, and mythology in general, in a real-world context, Mitsiopoulos said.

Mitsiopoulos encourages other people to read this book because the author does an excellent job at creating a fantasy world, she said. Kostova is very detailed with how she uses language, she added.

“This book is more like any other fantasy book, such as Harry Potter books and fantastical concepts,” Mitsiopoulos said. “When you read it, it feels more realistic.”