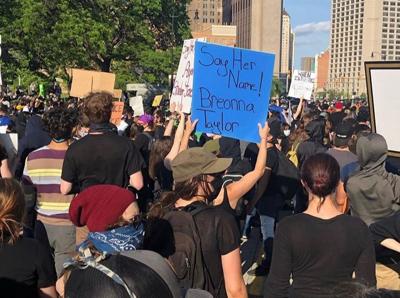 Organizers, community activists and students are taking necessary precautions to limit the spread of COVID-19 amongst protesters as Black Lives Matter demonstrations take place across Michigan.

“The pandemic and the safety standards that have been set have to be taken seriously while protesting as the pandemic is still without a cure, but there are occasions in which people have to take a stand,” said Tom Walker, Michigan United member and canvasser.

Michigan United is an organization dedicated to combating injustices against communities in the state, according to their website.

Walker said the upsurge in opposition against police brutality and the killing of George Floyd has led to the need for action “with as many safeguards as possible.”

Euphemia Wardlaw, a junior at Wayne State studying biomedical physics, has been to multiple protests in Detroit, Troy and Birmingham, she said.

To protect herself while protesting, Wardlaw said she keeps hand sanitizer with her, avoids touching her face and other people and keeps her face mask on at all times.

“Cases are going down, but it is still very real: we are in close proximity, it’s hot, people are sweating,” Wardlaw said. “We have to stay aware of it (COVID-19) while doing our part.”

Keeping distance between protesters to limit the spread of the virus was not possible during some protests, America Yahya said, a senior at WSU majoring in sociology.

“There was a struggle of trying not to be too close to each other, but also making sure we can keep the rally going because if you kept a distance the police would cut through the crowd and try to stop us,” she said.

People at the protests provide each other support while also making sure they are protecting themselves from COVID-19, Wardlaw said.

“Although I would say there are risks going out there, people were taking the proper safety precautions… and considering what we are fighting for, people are losing their lives so I feel like the risks are worth it,” she said.

While at the protests, Wardlaw said as far as she could tell, everyone was wearing a mask. People were also handing out hand sanitizer, water bottles and food.

On June 19, Michigan United collaborated with the NAACP to support a Juneteenth demonstration in Monroe, Walker said.

“Friday was a very hot day and marching with a mask on tends to reduce your air and make you hotter,” he said.

At the demonstration, support items were also distributed, he said.

“We supplied water, masks and logistical support in terms of materials for the event, and there were EMS trucks on hand,” Walker said.

Yahya joined the protests as an ally, she said, attending protests in Detroit and Dearborn.

“In the Arab community, I see a lot of pushback and hypocrisy so I feel like it is my responsibility to participate and educate others on what is happening,” she said.

A “collective consciousness” is needed to solve these issues, Wardlaw said.

“Of course we’re scared while protesting, but I would rather be fearful in this moment right now than to continue to be fearful my whole life just because of my skin,” she said.

Nour Rahal is a contributing writer for The South End. Rahal can be reached at nrahal1@wayne.edu.