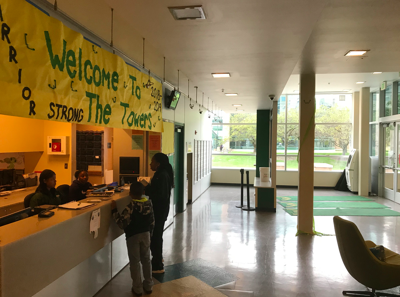 As the coronavirus rips through Detroit’s public health system — with 3,550 confirmed COVID-19 cases in the city alone  — Wayne State students and faculty are still adjusting to the changes.

At the moment there are still students on campus, but some find themselves at an impasse when it comes to staying or leaving.

Senior accounting major Devon Weatherspoon said heading back home is not an option easily afforded to him.

Back home, Weatherspoon and his family take care of their grandmother who has Alzheimer’s. She was in the intensive care unit for two months, battling pneumonia from the flu. Given the recent outbreak in Wayne County, and the cases specifically at WSU, he’s aware of the possible consequences if he goes home.

“I’ll try to stay here as long as I can,” he said. “I’m fearful of bringing something home that could affect her and my mom.”

In terms of what’s left on campus for people like Weatherspoon, he said there’s not much. Over 36 buildings are closed including the Mort Harris Fitness and Recreation Center, the Student Center and all libraries.

Freshman Jacob Acey said there’s not much to do on campus amid the coronavirus-induced lockdown.

“There was just so much available to do back then. Now there’s nowhere to go,” he said. “We just hang out, we’ve been playing a lot of Mario Party. We’re lucky to have our own rooms and so many video games to play.”

Weatherspoon said he’s spending this time catching up on shows, playing computer games and facetiming with friends. As of now, he tries to follow a routine and continues with his school work.

Acey said with not much happening on campus anymore, he hardly leaves his dorm. Despite rationing food to the best of his abilities, he still escapes to Towers Cafe at least once a day.

Currently, the cafe only allows five people at a time. But Acey said it’s not a major worry for him.

“We’ve started going when they open, but there isn’t much of a rush,” Acey said.

Weatherspoon shares the same sentiments about the cafe as well.

“I steered clear of it (Towers Cafe) until yesterday. There’s only so much ramen a person can eat back-to-back,” Weatherspoon said. “It was confusing at first because all I knew was that everything will be packaged or made-to-order. I feel like housing and dining could’ve done a better job of explaining the working rules of going to the cafe beforehand.”

This week, Weatherspoon made plans to venture outside his dorm and avoid the feeling of cabin fever. But, the number of COVID-19 cases in Detroit encouraged him to cancel and postpone all of his plans.

Those still on campus ring a similar tone to one another. The quiet and desolate campus is all that’s left for them by now.

As of last week, Weatherspoon slowly starting to pack things up — in case housing closes the dorms — and said he spends a lot of time thinking about that.

One anonymous residential adviser said the campus has been absolutely quiet since the pandemic broke out. She’s been quarantining in her dorm and hasn’t left for six days.

“It was kind of sad, I’m not going to lie. Residents are still here, but the atmosphere is a bit tense.”

“The really tense atmosphere is the biggest difference. it’s the only subject of talk at the moment, understandably, so a lot of us are much more anxious and quieter now than two weeks ago.”

Acey agrees and said WSU’s atmosphere, once vivacious and busy, has been sedated.

“It’s quieter. Almost in an eerie way,” he said.

Despite the fact there are many students who have the option to leave, they’re choosing to stay as long as they can.

For the anonymous RA, she’s choosing to stick it out because her school material is on campus.

“I stay here because my PC build (desktop computer) and MCAT materials are here,” she said. “But also so I can help my other staff members and residents in case somebody needs help.”

For her, the quarantine hasn’t affected her. She doesn’t worry too much about boredom or the possibility of cabin fever.

“I tend to be a very secluded person and work better that way,” she said.

As of today, Weatherspoon and the RA remain on campus but are ready to leave in case the situation becomes direr.

Students at Wayne State and across the country remain in a similar position. They’re sitting at an empty campus, unsure of the future.

For everyone involved, the situation became very real in a matter of weeks. Acey and the RA both agree it was difficult seeing friends and floormates move out so fast. In a sense, it felt like the end of the year. Except for this time, there’s no celebration.

Irving Mejia-Hilario is a contributing writer for The South End. He can be reached at ismejia48@wayne.edu.