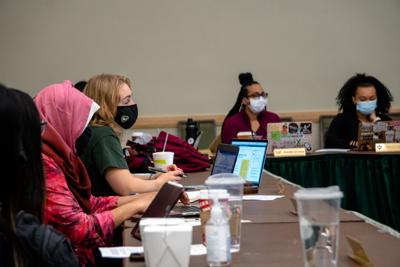 Student Senate’s ability to send emails to the student body via the Wayne State listserv has been limited to its quarterly report and additional messages with administrative approval.

During a Nov. 4 Student Senate meeting, Dean of Students David Strauss said Senate would no longer be allowed to use the Wayne State email listserv to send messages or surveys to the campus community.

However, on Nov. 16, an email containing a survey on Senate’s menstrual products initiative was sent via the WSU email listserv. In a Nov. 18 post-Senate meeting interview, Strauss said he allowed this email to be sent after some deliberation.

“Emails are meant to be used for promoting university events, programs, activities and their (Senate’s) interest in doing that on behalf of the student body, I made the decision to send it (the menstrual product survey),” Strauss said.

Strauss said WSU took other factors into account during the decision to send out the menstrual product email.

WSU recently surveyed its overall listserv use on campus, which included Senate’s access, Strauss said in an email to The South End on Sunday.

“We were looking at listserv policies and procedures related to all-student emails and did benchmarking of other four year public universities in the state,” he said.

WSU looked at other universities’ listserv access policies as part of this review, he said in the Nov. 18 interview.

“We’ve benchmarked the other Michigan public, four-year institutions and no Student Senate at any of our other 14 sister institutions are given carte blanche access to send out an email to the list whenever they want,” Strauss said.

Strauss said WSU would determine Senate's ability to send out statements via the listserv on an email to email basis going forward.

Harrison Cole, former Senate director of government affairs, said they're not confident about the impartiality of that process.

“I would just assume that that means that we can't send out anything that the university doesn't like,” Cole said.

Cole said they were removed from Senate due to absences during the Dec. 2 meeting. Senate confirmed the removal in an email to The South End on Monday.

Strauss said concern about the frequency with which students receive emails from WSU was a factor in reducing Senate’s listserv access.

Cole said they don’t think that is a valid reason.

“I just think it's silly to think that one more email is going to cause any less readership from people,” Cole said. “Maybe they should work on solving the spam email issue first if they want people to read their emails.”

Strauss said the Senate listserv restrictions are part of a larger attempt to ensure students are getting fewer messages from WSU.

“The university has made a concerted effort to reduce the number of emails that students are receiving and to that currentstudents@list.wayne.edu listserv,” Strauss said, “and so as part of that was…  curtailing Student Senate emails because I see the requests that are coming in and they’re things that come to our information table in the Student Center.”

Lukis Bagdon, College of Education representative, said it is not the listserv limitations that are the problem so much as lack of clarity regarding them.

“It's really one of those things where they keep you in the dark, so they can do whatever they want,” Bagdon said. “Like I am absolutely fine being restricted on things if those restrictions are clear. Like if you're like, ‘you can’t do XYZ thing,’ I'm like, ‘perfect, we can move from this,’ because now we have common ground and we can talk about it…”

Bagdon said this has not been the case.

“(W)hen we're kept in the dark, they have so much more power, because now we're just like, ‘any day the shoe could drop, any day anything we do could be stopped’, and then we don't really get a reason,” Bagdon said.

Strauss said during a Nov. 4 post-Senate meeting interview that one of the reasons for the limiting of listserv access was the sake of equal assets for all student organizations.

“To provide the Student Senate with a resource that the other student organizations don’t get is just something that if we can’t provide it to everyone, then one should not be able to get it over another,” Strauss said.

Cole said Senate gets many university benefits that set it apart from other student organizations. This includes a $25,000 budget, consistent meetings with President M. Roy Wilson and Provost Mark Kornbluh, Senate elections, seats on WSU committees, and an official WSU website.

“So I don't really see the logic of treating us just like another student organization,” Cole said. “Like I said, I think that delegitimize us. I think it prevents us from doing further work— any actual serious work anyway.”

Bagdon said this issue affects current and future senators' ability to serve students. This is exacerbated by the relatively short terms senators have compared to the length of time staff are employed by WSU.

Both Bagdon and Cole said they believe these restrictions were responses to the Palestine and Operating Engineers statements Senate released earlier this year.

“(R)eally this is reactionary,” Bagdon said. “Like I guarantee if we hadn't done the things we did, which I am personally incredibly proud of, we would not be having these restrictions put upon us.”

Cole said they were disappointed in WSU’s behavior.

“I just think it's really cowardly and shameful for the university… to be shutting down any criticism of the administration,” they said. “I just think it just really shows kind of how fragile they are.”

Student Senate President Sailor Mayes could not be reached for comment.

Cover photo from the Nov. 4 Student Senate meeting by Quinn Banks, The South End's multimedia editor. He can be reached at multimediaeditortse@gmail.com.