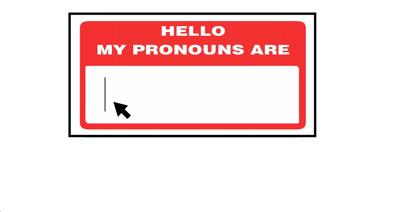 Wayne State has updated its digital platforms with options to indicate an individual’s pronouns.

The move allows campus community members to include their pronouns in their profiles on university platforms, including Academica and Canvas.

“Often this kind of pronoun system can help when people are trans or gender non-binary or genderqueer because they want people to know what pronouns they use but this isn’t exclusively something that’s coming out of the queer community or only for queer members of our community,” Chess said.

“So we decided ‘okay, now that we have an infrastructure, we have a place to store this data, let’s start making this available in other systems’ and that really started this committee and our conversations,” Chavez said.

Kristin Johnson, Office of Multicultural Student Engagement academic advisor and advisor for student engagement, said the implementation and announcement of the move took about one and a half months.

“I think it was just the work of a lot of people wanting to collaborate and do good work together,” she said.

Chavez said there was a strong demand for the move as digital platforms developed the option to indicate pronouns.

“Really it came about mostly prompted by the fact that many of our systems began to have compatibility with personal pronouns, Canvas being the big one that a lot of people asked about and were really excited about when they first found out about it,” Chavez said.

The move included the work of administrators, faculty, C&IT staff, and the Office of the Registrar, Chess said.

“All kinds of different players had to come together and I think it’s good news that there’s energy to do that kind of collaborative work on our campus towards inclusion and transparency,” Chess said.

“Not just for our LGBTQ community, but also for students who have names that may be popular in other languages, like known as this particular gender,” Johnson said.

The goal of C&IT’s work is to serve a diverse campus community efficiently, Chavez said.

“It’s always important to craft our systems so that they can work for people and actually make them feel like they’re representing them,” Chavez said.

Chess said she had gotten positive feedback on the move.

“I’ve heard from lots of other instructors how nice it is that when they look at their class list in Canvas they can see those people who’ve chosen to display pronouns and that can help them in facilitating discussion,” Chess said.

There has been some negative feedback from individuals concerned that they would be mandated to share their pronouns, Chess said.

“It’s totally optional. You can opt to have no displayed pronoun, you can opt for the ask me button, which just means, 'I’m not disclosing it on this form but you can ask me what pronouns I like to use,'” Chess said.

“I’m concerned that there’s not a stronger enforcement policy for situations in which people choose to display or disclose their pronouns and other people choose not to use the pronouns that are displayed,” Chess said.

Johnson and Chavez said they agreed with Chess’s concerns.

C&IT staff are working on expanding the pronoun options across all campus software, Chavez said.

“It should feel really normal and it should be something we’re used to seeing all the time and I think that’s really kind of the goal, to make it something that’s just kind of pervasive,” Chavez said.

Additional information is available on the WSU Pride website.