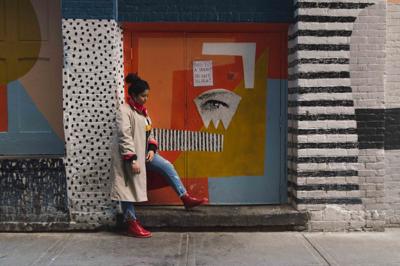 To close out Women’s History Month 2019, TSE will be publishing an article every day this week that highlights the accomplishments and goals of a featured Wayne State Warrior.

The 2018 Women in the Workplace Study concluded women are still less likely to be hired into managerial jobs than men and are even less likely to be promoted into them. However, this Wayne State student is changing the game by being a leader in her own community.

Suchitra Nair is a junior information systems management student who dreams of having her own empire. Her drive and passion for the business field is practically tangible when she talks about her goals and contributions to the field.

Nair is an ardent believer of intertwining female empowerment and the world of business, which she does in her student organization, Global Business Brigades.

Nair is president of Global Business Brigades, an organization that uplifts and empowers business owners in different countries across the world by building economic opportunity for people through consulting and literacy workshops, she said.

Nair was introduced to Global Business Brigades during a time where she felt uncertain about her career path, she said. Joining the group helped her realize her love of business and helping others.

“I was introduced to GBB (Global Business Brigades) when I was aimlessly walking around Winter Fest. The president of that year begged me to join the organization, because she knew I was looking for something to join and explore, and it looked super cool,” she said. “I joined and right away became the education chair because the group was super low-staffed. I was in charge of creating educational curriculum for the micro-enterprises that we visited during our that year’s brigade trip.”

Last year, Nair and the group visited Honduras where the main focus of the trip was education initiatives. She said the group started from the bottom and worked its way up. The group heavily emphasized the importance of financial literacy.

“The trip shifted my perspective on things because even though I knew of certain conditions and issues that poverty creates. It was really impactful to spread education and teach lessons,” she said. “Last year was focused on children and savings. We taught children the importance of saving money. For adults, we focused on teaching how the banking system worked and why it’s important to keep your money in a bank. We also taught lessons on loans and interest rates.” 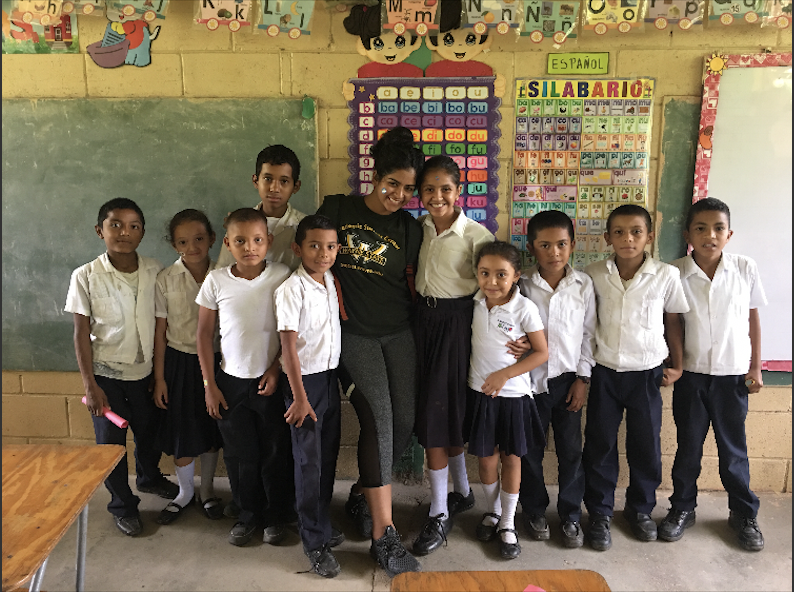 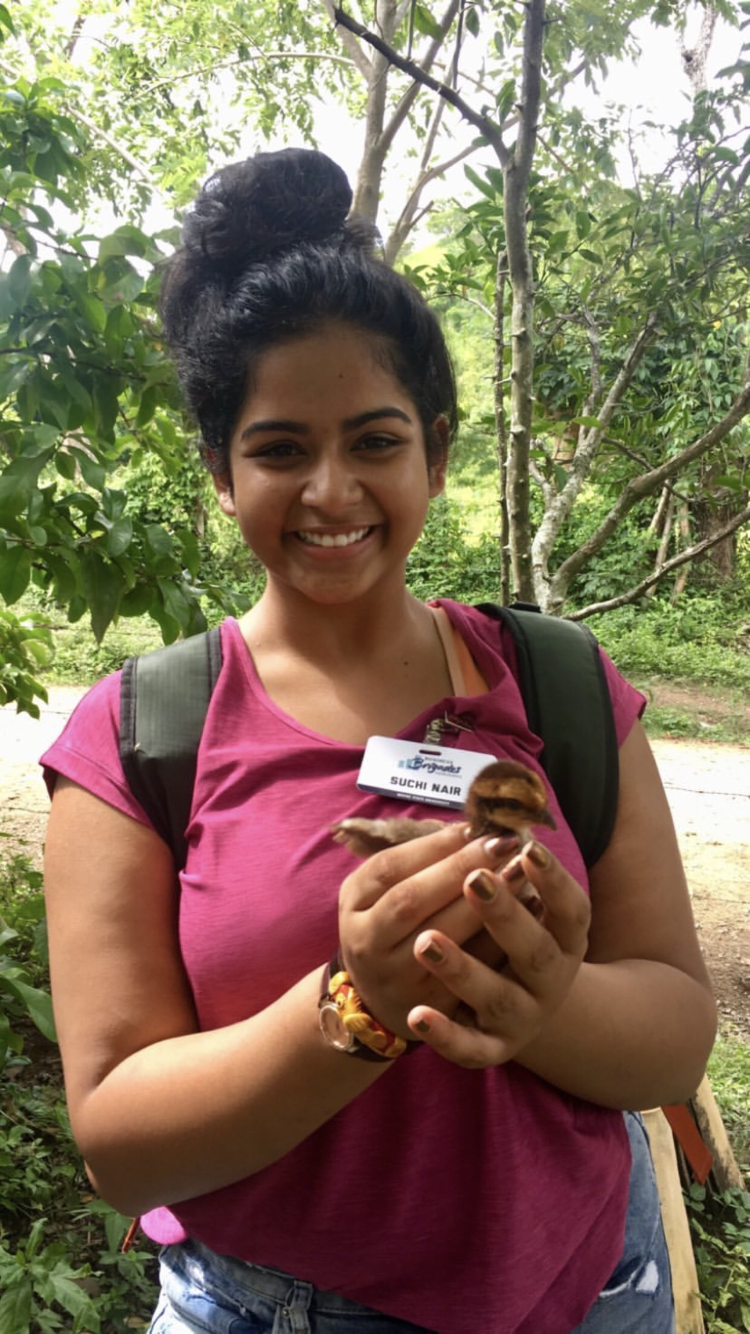 Nair holds a bird in Honduras.

Nair holds a bird in Honduras.

This year, Nair is the president of the organization and plans on taking the group to Panama.

“This year, we are developing better curriculum for the community and its business leaders,” Nair said. “We develop curriculum that is a holistic approach. It’s not like most organizations whose effects are temporary. We develop lessons that provide an ongoing train of support for the sole proprietors that we visit.”

Nair said the organization helped to cultivate who she is as a leader, student and business woman.

“This organization is a really good experience to have. It provides you with an out-of-classroom experience and teaches you important skills that every future business leader needs,” she said. “The trips teach you how to collaborate with people and how to step up under pressure. Sometimes, you have to give a speech in front of 20 people or have an impromptu, but all of these skills teach you how you be a business leader.”

In the future, Nair hopes to work for a company such as Google, but also has dreams of becoming a CEO.

“My dream job is to be my own entrepreneur and CEO,” she said. “Out of college, I’m aiming to be a business analyst. I want to make my own empire and start my own consulting firm.”

For other women who are studying business, she said having a mentor is instrumental to attaining success. Nair was matched with a mentor through a corporate mentorship program.

“I wanted to be mentored by a woman to know what it’s like being in this business as a woman,” she said. “In my first meeting with my mentor, I asked her if she felt discriminated against and she told me, ‘When you know your stuff then you have nothing to worry about because we are just as capable as men.’”

Slone Terranella is news editor of The South End. She can be reached at gh7510@wayne.edu. Photos by Jonathan Deschaine.

I am incapable of reading articles online very often, but I’m happy I did today. It is very well written, and your points are well-expressed. I request you warmly, please, don’t ever stop writing. rageagainsttheminivan.com

I invite you to the page where you can read with interesting information on similar topics. how to fix pname com facebook orca error on android

What a thrilling post. It is extremely chock-full of useful information. Thanks for such a great info. http://betfair-trading-surebets.blogspot.com/2007/12/alcuni-link-utili.html

In the world of www, there are countless blogs. But believe me, this blog has all the perfection that makes it unique in all. I will be back again and again. https://gamesurf.tiscali.it/forum/showthread.php?112637-Superstars

I haven’t any word to appreciate this post.....Really i am impressed from this post....the person who create this post it was a great human..thanks for shared this with us. Latest Music

I don t have the time at the moment to fully read your site but I have bookmarked it and also add your RSS feeds. I will be back in a day or two. thanks for a great site. judi sd manusia

Thanks for taking the time to discuss that, I feel strongly about this and so really like getting to know more on this kind of field. Do you mind updating your blog post with additional insight? It should be really useful for all of us. https://www.longboredsurfer.com/links/tag:sports

Thanks for taking the time to discuss that, I feel strongly about this and so really like getting to know more on this kind of field. Do you mind updating your blog post with additional insight? It should be really useful for all of us. first reseller panel

Believe it or not, it is the type of information I’ve long been trying to find. It matches to my requirements a lot. Thank you for writing this information. https://www.prnewswire.com/news-releases/solaire-generation-and-irc-install-first-long-span-360-solar-carports-at-danversport-yacht-club-255335331.html

Much thanks to you such a great amount for your dependability and backing. http://mo-ri-wa.blogspot.com/2014/08/sunday-again-unter-die-haut.html

Offer thanks toward For Sharing This Amazing Article With Us. Continue Doing this Great work. http://www.forum.hr/showthread.php?t=266140&page=387

I have bookmarked your blog, the articles are route superior to other comparative online journals.. a debt of gratitude is in order for an extraordinary blog. http://bubuabela.blogspot.com/2014/02/

I have express a couple of the articles on your site now, and I truly like your style of blogging. I added it to my preferred's blog website list and will inquire soon. http://www.vecernji.hr/hrvatska/ne-bojim-se-zatvora-homoseksualnost-je-bolest-470333

I am certainly making the most of your site. You unquestionably have some incredible knowledge and extraordinary stories. https://id.wikipedia.org/wiki/Daftar_negara_menurut_tingkat_bunuh_diri

Whenever I have some free time, I visit blogs to get some useful info. Today, I found your blog with the help of Google. Believe me; I found it one of the most informative blog. writing blog

Wonderful blog! Do you have any tips and hints for aspiring writers? Because I’m going to start my website soon, but I’m a little lost on everything. Many thanks! mcqueen games

Much obliged to you for setting aside the effort to distribute this data valuable! Mold Remediation Service Near Noblesville

I got so inspired by this material that I was unable to quit perusing. Your blog is extremely great. Water Damage Restoration Service Near Carmel

I am thankful to you for sharing this plethora of useful information. I found this resource utmost beneficial for me. Thanks a lot for hard work. what to post on instagram to get likes

A debt of gratitude is in order for a couple of assistant enlightening weblog. in which else should I suspect that type of protection written in such a truly impeccable way? I have an assignment that Im essentially now running with respect to, and I have been at the see out for such suggestion. Ameriprint large format printing

Conventional to visit your blog again, it possesses been an exceptionally long energy for me. Well this article i've been kept things under control for so long. I need this article to complete my assignment in the school, and it has same point with your article. pool enclosure screen repair

I exploit solely premium quality products -- you will observe these individuals on: tvister

You have a real talent for writing unique content. I like how you think and the way you express your views in this article. I am impressed by your writing style a lot. Thanks for making my experience more beautiful. http://107.178.109.59/

Be the precise blog if you have wants to learn about this topic. You comprehend considerably its nearly onerous to argue to you (not that I personally would needHaHa). You undoubtedly put a new spin for a topic thats been discussing for some time. Nice stuff, simply nice! where to buy sonus complete

Thank you again for all the knowledge you distribute,Good post. I was very interested in the article, it's quite inspiring I should admit. I like visiting you site since I always come across interesting articles like this one.Great Job, I greatly appreciate that.Do Keep sharing! Regards, Airconditioning

You have a real talent for writing unique content. I like how you think and the way you express your views in this article. I am impressed by your writing style a lot. Thanks for making my experience more beautiful. Aluminium deuren

Well-Written article. It will be supportive to anyone who utilizes it, including me. Keep doing what you are doing – can't pause to read more posts. Thanks for the precious help. аккредитация на таможне

I visit your blog regularly and recommend it to all of those who wanted to enhance their knowledge with ease. The style of writing is excellent and also the content is top-notch. Thanks for that shrewdness you provide the readers! best ebooks online

This is very interesting, but it is necessary to click on this link: buyyoutubeviewsindia

i really like this article please keep it up. kapitalanlage

Wow, excellent post. I'd like to draft like this too - taking time and real hard work to make a great article. This post has encouraged me to write some posts that I am going to write soon. Sell cars