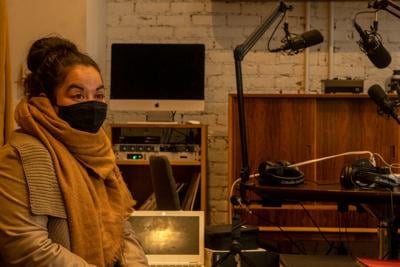 Many candidates are running in the 2020 election, but few are doing so while also finishing a college degree.

Mary Cavanagh, a Wayne State University physical anthropology major, is running for the Michigan State House of Representatives in District 10, which includes northwest Detroit and Redford Township. While balancing a campaign and classes can be overwhelming, she is finishing both strong, she said.

Much like her classes, campaigning has been affected by the COVID-19 pandemic, limiting in-person interactions, she said. Most of her volunteers are young people who already knew how to utilize social media and Zoom effectively.

Running for office and finishing a degree has made her balance her time, including taking breaks to prioritize her own wellbeing, Mary Cavanagh said.

“I learned how to give myself the space to relax, escape in a Netflix binge or just know when to step away,” she said.

This is Mary Cavanagh’s first campaign, but she’s been around politics most of her life. She is the granddaughter of Jerome Cavanagh, mayor of Detroit from 1962 to 1970, and the daughter of Phil Cavanagh, former state representative from District 10.

“I’ve been a Democrat before I could remember because of how my dad is,” Mary Cavanagh said. “I idolized how he treated people, how he heard people and how he really stood up for people that couldn’t stand up for themselves and I felt that was what a Democrat is.”

Mary Cavanagh is motivated by a genuine desire to support her community, said Lauren Novak, public relations and social media coordinator for the campaign.

She is running for state representative because of three important issues, Mary Cavanagh said: education, universal healthcare and support for small businesses.

“She’s not someone who wants to do it because it runs in her family. She knows what is failing in the community and she really wants to get in there and knows she has a good shot. She doesn’t let things get her down. She knows where she stands and sticks to that,” Novak said.

Small businesses and schools have been affected by the pandemic, Mary Cavanagh said. She wants to ensure they have enough money and resources to survive the pandemic.

“I see how small businesses aren’t being able to afford their rent or even turning on their lights,” she said.

Her father, Phil Cavanagh, said he has never seen his daughter so passionate.

“Mary’s up for the job and I’ve never seen her commitment, her energy be as high, for anything as her father in her lifetime. Honestly, she’s going to serve for district 10 and —most of all— she cares. In this wicked political world, you don’t see that too much,” he said.

Mary Cavanagh said she is focused on the next generation and what she can do to help young people find success, she said.

“Even after politics, I want to be a counselor or mentor to high school students, and I feel that will be my calling to be able to educate and help the youth and really help mental health as far as how kids are feeling, how anxious they are and it’s really needed to be a conversation,” Mary Cavanagh said.

Mary Cavanagh encourages young people to let their voices and votes be heard at the polls, she said.

“I think especially for young people, we have a loud voice and many opinions and every vote matters and I try to show that in my campaign,” Mary Cavanagh said. “I think once we vote it’s going to speak to us and we're going to see what we want to see.”

Cover photo and video by Quinn Banks, multimedia editor for The South End. He can be reached at multimediaeditortse@gmail.com.