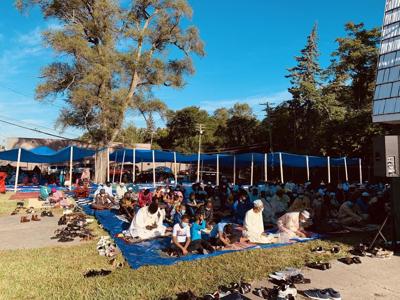 Celebrated this year on July 31, Eid al-Adha marks the ending of Hajj —a pilgrimage to Mecca. Hajj was affected this year by safety regulations put in place due to COVID-19, resulting in a significantly reduced number of pilgrims allowed to participate, according to the New York Times.

With Governor Gretchen Whitmer's new executive order, indoor gatherings of more than 10 people are not allowed.

"I'm not too angry. This is a tough time and she's making tough decisions," she said. "I'm just doing what I can to keep myself and other people safe. This is literally a life or death situation, especially with asymptomatic patients."

Noor Alshara, a psychology major at WSU said, "I wanted to make sure the value of Eid wasn't lost."

At Islamic Community of As Salaam —a mosque in Detroit— prayer took place outside, Atkins said. Families stayed six feet apart and brought their own prayer rugs and face masks.

“We had to sit according to family members and tarps were put up to block the sun,” Atkins said. “The Imam told everyone to leave right after the service to avoid crowding.”

Eid prayer was held outside for many communities.

Alshara said she tried to keep the spirit of Eid alive for her siblings by dressing up and going to the park.

"I don't want them to look back at this Eid and just remember the pandemic," she said.

Atkins also celebrated in the park with a family barbeque, she said.

Her family still dressed up and took pictures to commemorate the “special but weird occasion,” Atkins said.

The Tox Box MI’s mission is to “provide underprivileged Muslim youth in the metro Detroit area with the opportunity to enjoy and cherish their Islamic holiday season by supplying toys and educational resources to nourish both their fun and free time,” according to the organization.

Muhammad Ahmed, a first-year medical school student at WSU and WSUMSA member, said Muslim Family Services provided contacts for families in need, including age and gender of the children so the gifts were specific to the kids.

The Toybox MI set up a LaunchGood campaign to fund the toy drive, Ahmed said.

Donation boxes were also set up at main mosques in the metro Detroit area, including Rochester Hills, Canton, Hamtramck and Ann Arbor.

Ahmed said The Toybox MI chose to get bigger gifts with a budget of $50 per kid, instead of getting small gifts for more children -- funds covered about 80 kids.

"It started off with a vision of refugee Muslims and grew to all Muslims in need,” said Harras Khan, a senior public health student at WSU.

The Toybox MI is distributing the toys to families on Monday, Ahmed said.

Khan also said they saw Eid as a chance to connect with non-Muslims.

He said it was special to get Eid greetings from all his friends, whatever religion they followed.