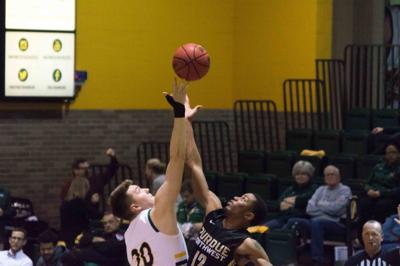 Purdue led 35-25 at halftime and held a 68-59 lead late in regulation. WSU staged a furious comeback, outscoring Purdue 9-1 to cut their deficit to 69-68 with 32 seconds left in the period.

After two Pride free throws and a layup by senior guard Brailen Neely, WSU had the ball down 71-70 with five seconds left. On the ensuing possession, sophomore guard Antonio Marshall was fouled on a three-point attempt as time expired.

Marshall made his second free throw to tie the game at 71, sending the game into overtime.

In the extra period, Marshall and senior guard Karim Murray combined to score nine points to give WSU an 80-78 lead with less than a minute remaining.

After a WSU turnover, Purdue Northwest’s shot to win the game went off-target at the buzzer, sealing the win for WSU and snapping their losing streak.

Despite the Pride controlling play for most of the game, head coach David Greer said the team was due for this type of win.

“We dug ourselves a pretty deep hole today and Brailen and Karim made some great plays toward the end of the game,” Greer said. “They helped us out by missing some free throws down the stretch. Obviously, we were fortunate to get away (with a win) but we’ve lost quite a few of them that way, so we were due for one.”

“I felt the best thing was to pull up and trust my jumper and it worked out for me tonight,” Neely said.

Earlier in the evening, WSU women’s basketball snapped their three-game losing streak, with an 81-58 win over Purdue Northwest at the Matthaei.

After falling behind early, the Pride held WSU scoreless for four minutes to take a 14-12 lead late in the period.

Junior guard Kara Wilson and sophomore forward Kate Sherwood combined to score the final six points of the stanza to give WSU an 18-14 lead.

Wilson scored the first five points of the second period to increase WSU’s advantage to 23-16. After a PNW basket, WSU used a 10-0 run, punctuated by baskets from freshman guard Rebecca Fugate and sophomore guard/forward Grace George to take a 33-18 lead. WSU held a 33-23 advantage at halftime.

Head coach Carrie Lohr said the production from the bench helped the team get the win.

“I thought that our bench came in and really gave us what we needed,” Lohr said. “I think when we’re successful, it’s when our bench comes in and is ready to play.”

Lohr said the best part about Wilson’s performance is that she took shots in rhythm.

“She wasn’t forcing shots, she saw opportunities and capitalized on it,” Lohr said. “Everything she did today, it wasn’t forced, it looked natural and her teammates really got hyped about what she was doing.”

Wilson said getting to the perimeter was a focus for her once she entered the game.

“I saw that they really weren’t doing anything to the post, they were letting the post do whatever they want, so when I caught it down there I just tried to be patient and let it come to me,” Wilson said.

WSU improved its overall record to 13-11 with the win and 7-9 in conference play.

Both teams return to the Matthaei to face Wisconsin Parkside Feb. 15.