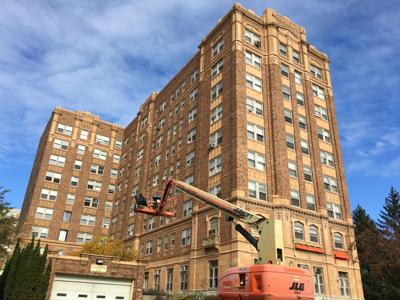 Brian Fitzgerald, associate director of housing facilities, said the school has been aware of the leaking issue for two years but repairs to the building’s roof have intensified the issue.

“Over the last two years we have some issues with leaking into the ninth floor from the roof,” he said. “This has been exacerbated by the exterior work we have been doing.”

Fitzgerald said the university sent a plan on Oct. 19 to move everyone who lives on the ninth floor and residents will be offered a chance to move into other units.

Fitzgerald said he went through all rooms on the ninth floor during the first week of October to assess the extent of the issue.

“The leak issue is old because I lived in two different apartments on the ninth floor and both times the rooms had water leakage,” said Shashwat Mishra, a graduate biology student whose room is starting to leak as well. “You can smell the mold as soon as you step out of the elevators on the ninth floor.”

Michael Salsaa, a graduate biology student and Mishra’s roommate, said they helplessly watched as their walls slowly bubbled with water and turn into a leak.

“Our neighbors from next door had a water leak for a month in their bedroom before they were relocated,” he said.

Mishra said WSU is vacating the entire ninth floor and when he emailed Fitzgerald with concerns about the building’s roof, Fitzgerald replied: “We hope that we can move you out soon.”

“What do you mean you hope ‘we can do it soon?’” Salsaa said.

Salsaa said they will be relocated to the fifth floor of Chatsworth before Nov. 12. Their new apartment is a one-bedroom apartment and they will be paying the same price as their prior apartment, which is $3,940 a semester.

Tim Michael, chief housing officer, said they are moving residents out because patching up the leaks is not an efficient way to fix the problem.

“The leaks have been getting worse and we do have other vacant spots in Chatsworth and DeRoy that residents of Chatsworth can move to,” he said. “I know it’s inconvenient and disruptive to the school year.”

The washing machines in Chatsworth were repaired on Oct. 23, five months after they were reported damaged, Mishra said. Residents were required to use the machines in DeRoy during this period.

“They haven’t been working for five months now,” he said. “The (DeRoy) front desk people let us in because they know we have to go there to do our laundry but it’s not convenient for us.”

The trouble with the washing machines was reported to building desk assistants, housing directors and community directors, Mishra said.

“They keep saying they are going to fix it and not actually do anything,” he said.

Salsaa said there’s an app from the washing machine’s company, Wash, where students can report any machine-related problems. He said this was only a way for WSU to make students responsible for repairs.

Fitzgerald said he first heard about the washing machine issue at the Residence Hall Association town hall meeting on Oct. 8.

Salsaa said there is a lack of communication between residents and the housing staff. He said the staff is not open to answering questions about certain policies.

“Housing is not the best here at WSU,” he said. “I’ve emailed many times, and you can’t question what they say because we are just supposed to accept those policies.”

Fitzgerald said the issue of miscommunication stems from the central housing office.

“The office was hammered with emails and calls during move-in,” Fitzgerald said. “There is the possibility of things being missed in the process.”

Susana Hernandez is The South End’s WSU Board of Governors and campus housing beat reporter. She can be reached at susana.hernandez@wayne.edu.

Write more, that’s all I have to say. You obviously know what your talking about. Thanks for sharing the valuable post. Tablets e Smartphones

The trouble with this apartment, we should report to the chairman of state. And hope everything would be solved soon. Ps from cho thuê phòng trọ tại xuân thủy cầu giấy

Nice article! WSU Housing department has a lot of problems. They ignore student requests, don't answer emails or inquiries, stick to arbitrary rules, and don't fix any major issue within a reasonable amount of time. I think the University should have an investigation into the Housing department and we, as students, should all speak up against this maltreatment.

Hello friends! Let me speak some.I doubt that many and many of you time after time crush with a question of quality of interior waterproofing. It is the main question when you build a new house and want it stay on this land for centuries. Basement leak repair with they 25 year transferable warranty can make your waterproofing a fairytale.