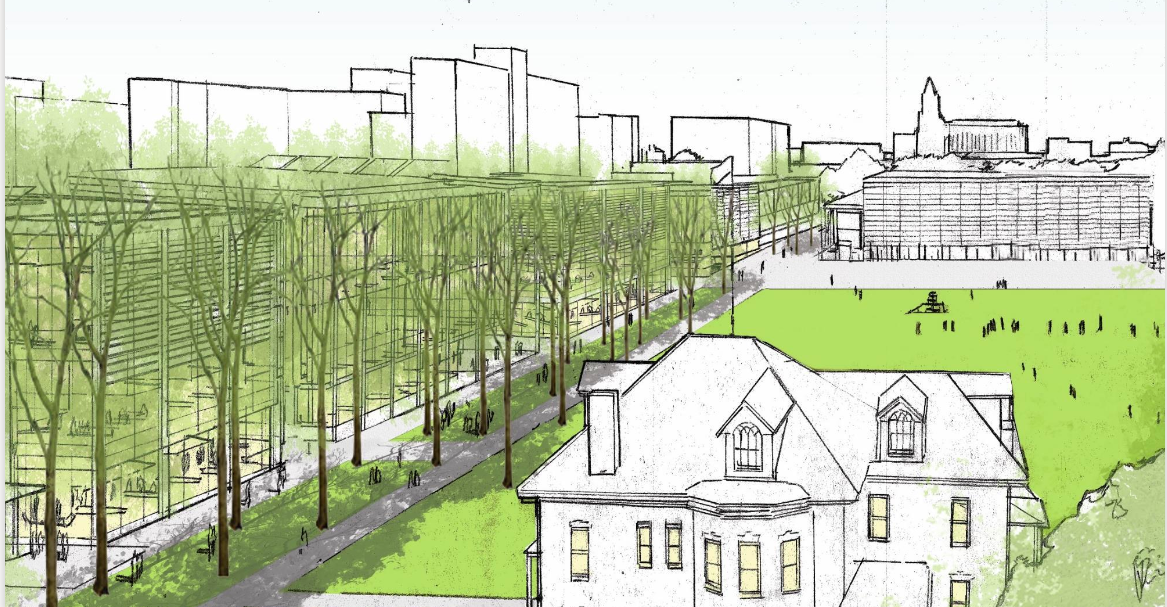 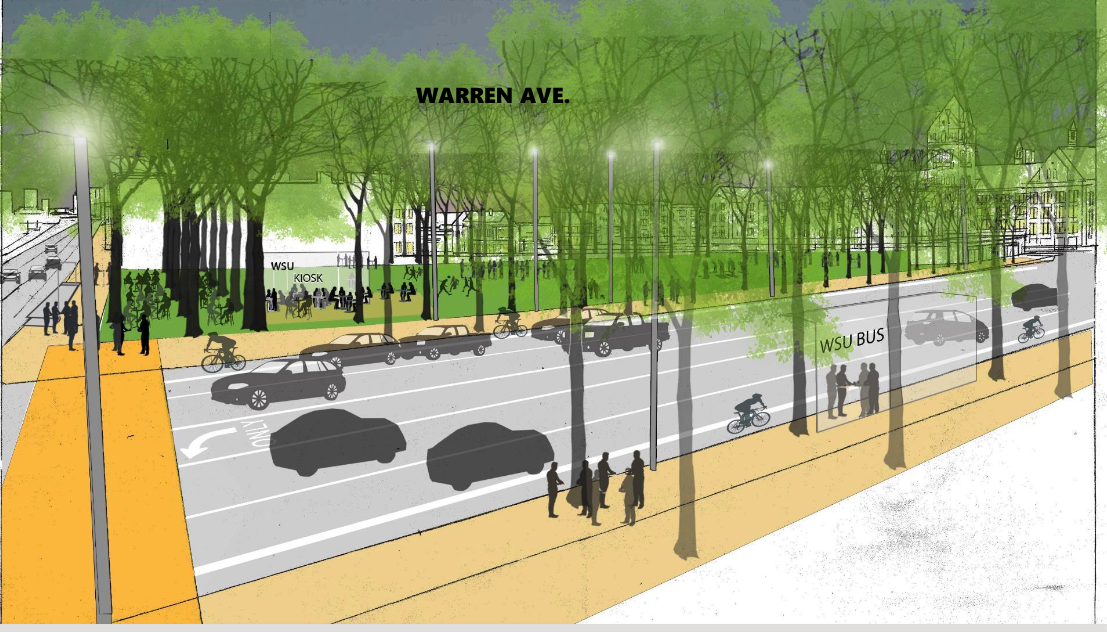 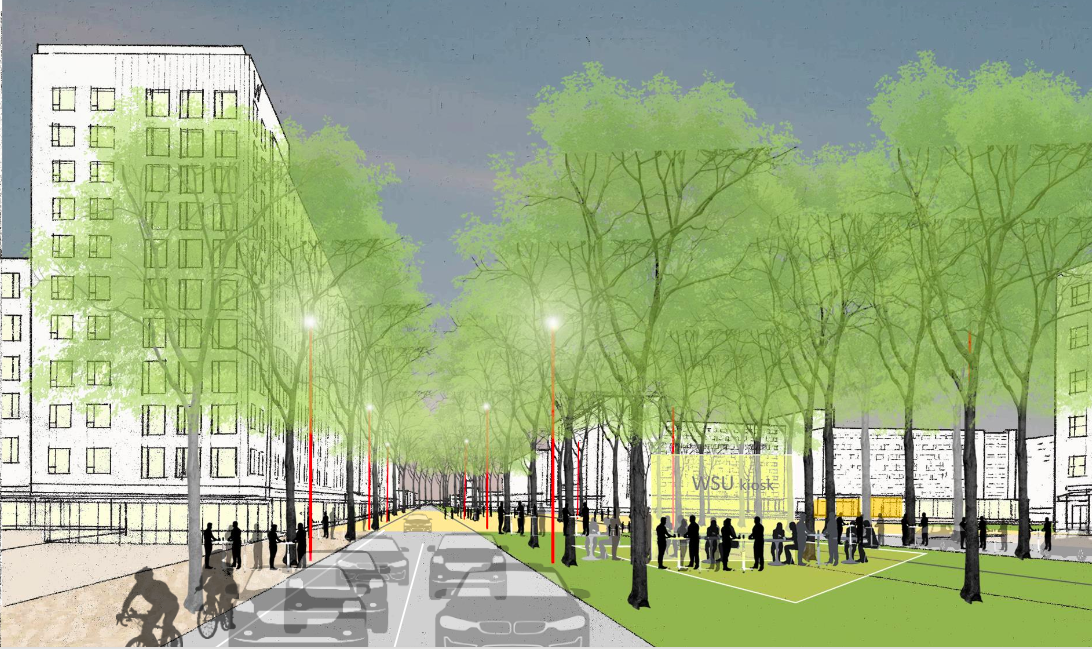 Depiction of the lane reduction on Anthony Wayne Drive | DumontJanks 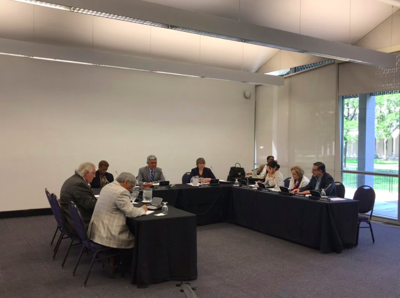 The Board of Governors held a special meeting on June 7 at McGregor Memorial Conference Center to discuss updates with Wayne State's Campus Master Plan.

The plan calls for the improvement of overall campus experience for students, staff and faculty.

Janks said there’s a lack of synergy between different sections of campus.

“The key idea for better organizing the campus is to highlight the ‘H’ consisting of Gullen Mall, Cass Avenue, and the east-west cultural axis,” the plan says. “Gullen Mall should be the internal pedestrian and student oriented campus ‘main street’; Cass Avenue must become a true civic corridor where the university and city blend and merge.”

The plan calls for the improvement of Gullen Mall, by the adding of more green space in the middle and putting sidewalk on the exterior. Janks said by doing this, it would create a more welcoming feeling to the campus.

Board member Marilyn Kelly questioned this initiative. She said this would be a good idea if we were in a warmer climate region. “This isn’t Los Angeles or Tampa, Florida,” she said. “These areas are covered with snow for half of the year.”

“When we asked students what library was their favorite,” Janks said. “Most students said they liked the Detroit Public Library the most.”

Janks said the committee is considering a partnership with the library and the adding of a crosswalk would integrate the campus and the cultural corridor.

The plan also calls for concentrating College of Fine and Performing Arts into Old Main and emptying out Manoogian Hall and General Lectures. It said it would possibly consider demolishing these two buildings.

Board members Kim Trent and O’Brien said they were concerned with the emptying and possible demolishing of Manoogian due to the murals and cultural rooms inside the building.

Janks said the items would be moved out of the buildings before any possible demolition would take place.

Planners conducted a traffic study of Warren Avenue and Anthony Wayne Drive, and found these areas to be dangerous for students to cross.

“From the traffic data and research we conducted, condensing Warren Avenue would have minimal effect on traffic by only 30 seconds,” Janks said.

The plan suggested the repurposing of Walter P. Reuther Library and the Purdy-Kresge Library “to better support student study and collaboration,” according to the plan, but the repurposing is no longer being considered.

Charles Parrish — president of WSU’s professors union, AAUP-AFT Local 6075 — said he was dissatisfied with the idea of repurposing of Reuther.

“Throughout the world, the Walter Reuther Labor Archives serves as a monument to organized labor. It is the intellectual center for those who study workers and the social movements developed, in part, from labor leaders.”

“These and other historic materials in the archives are part of priceless trove of primary material that must be protected for scholars whose work illuminates the impact of organized labor, those who brought you the weekend and other benefits,” Parrish said. “There is a lively market for memorabilia that these materials constitute. They are literally locked up to protect them from theft or vandalism.

"The foot traffic from repurposing of the archives building to a student service building would create serious and unnecessary security challenges.”

There is no timeline for when the plan will take place and the recommendations will be adjusted as more resources become available.

There are several developments happening on campus as of now, with the relocation of the Mackenzie House, Gateway Performance Complex and the new men’s and women’s basketball arena in partnership with the Detroit Pistons.

The next BOG meeting will be June 21 in room BC at the McGregor Memorial Conference Center.