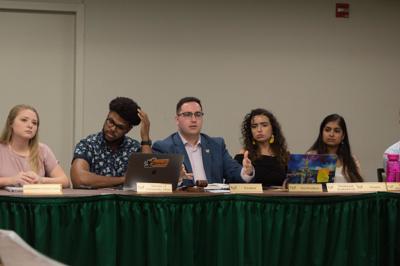 Provost Keith Whitfield met with Student Senate during their April 19 meeting. Whitfield and representatives from the Office of the Provost discussed Senate’s Open Educational Resources project and on-campus transportation.

“I believe one of the proposals was reviewed by faculty senate and some other faculty. They were a little concern about (intellectual property),” Whitfield said. “IP is one of the biggest issues in this area, who actually owns the property rights to it?”

Whitfield said some faculty members were worried about ownership rights over material they developed.

“Some of them wondered if adding their own content meant other people could use it without permission,” he said. “Basically, if a faculty member is using material they’ve developed, they’re worried about who might use it. However, none of the faculty are against the lowered cost. They know how much those textbooks cost.”

If one percent of faculty implemented Open Educational Resources then students would save a projected $40,000 from the cost of textbooks alone, Whitfield said.

Director of Community Affairs Paul Jones III said he is focused on improving on-campus transportation options for students during his Student Senate term.

Jones said his committee and Wayne Rides — WSU’s transportation committee from the Office of Economic Development — will team up with the W Food Pantry to distribute free bus passes.

“If we gave students free bus passes directly from financial aid then it could be counted against their cost of attendance and cause issues for that student,” Jones said.

Other notable events from the meeting include the development of the on-campus polling location and a possible fall break.

Stuart Baum and other Senate members worked throughout the year to create an on-campus polling location for students, faculty and community members. The polling center is scheduled to be ready by the March 2020 presidential primary elections.

According to the Polling Location Proposal, “A Wayne State University facility would qualify to serve as an on-campus polling location if its use as a polling location does not interfere with regular day-to-day university operations.”

Along with this, the Senate also discussed the possibility of implementing a fall break. According to Baum, WSU is now a minority in comparison to other Michigan universities in terms of not having a fall break.

Central Michigan University recently created a fall break this year and researched the effects it had on students.

“An important thing to note is that the utilization of (Counseling and Psychological Services) or the equivalent of CAPS at CMU’s campus spikes during the time during their proposed fall break, which is when we would also have our fall break,” Baum said. “People get so burnt out and stressed without having some sort of break. This seems way more feasible than what we thought.”

The next Student Senate meeting will be May 2 at 6 p.m. in Hillberry A/B.

Slone Terranella is news editor of The South End. She can be reached at gh7510@wayne.edu. Photos by Jonathan Deschaine.

Succeed! It could be one of the most useful blogs we have ever come across on the subject. Excellent info! I’m also an expert in this topic so I can understand your effort very well. Thanks for the huge help. Markham Wedding Limo

This is a real topic to have a discussion. Thanks for this, I also have some topics to discuss on Types of fades

Seminar that created by Whitfield and sure more chances for meeting, exchange the idea, we admire that... ps at trung tam sua chua laptop dell

Happy to read that students got chance to meet Whitfield during Student Senate meeting and got to familiar with open educational resources project and on-campus transportation.
Jack,
http://www.qualitydissertation.co.uk/

Thank you again for all the knowledge you distribute,Good post. I was very interested in the article, it's quite inspiring I should admit. I like visiting you site since I always come across interesting articles like this one.Great Job, I greatly appreciate that.Do Keep sharing! Regards, acheter kamagra gel 100 mg

Glad to learn about the presence of whitfield at Student Senate meeting and discussed about Open Educational Resources project and on-campus transportation initiative. Sarah, http://www.secureassignmenthelp.com/