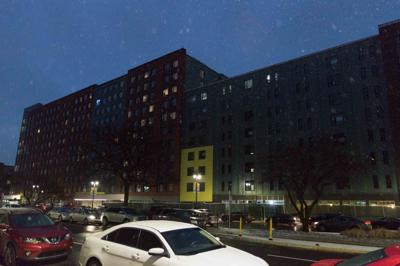 Students of all ages can agree on one thing: Snow days are the most pleasant surprise. Wayne State canceled classes partially on Jan. 28 and 29, and closed campus entirely on Jan. 30 and 31 during a polar vortex which brought subzero temperatures.

WSU Chief of Staff Michael Wright said there are multiple factors that go into deciding the cancellation of classes.

“One factor considered when calling a snow day is the safety of our campus community,” Wright said.

He said he consults with William Decatur, vice president of finance and business services; Anthony Holt, chief of WSU Police Department and Provost Keith Whitfield to determine whether campus should be closed.

“The four of us develop a recommendation and then call the president,” Wright said.

Holt said he provides a full forecast and works with other law enforcement agencies, public works departments and road crews to monitor road conditions. Once he gathers all of his data, he contacts Whitfield, Wright and Decatur.

Holt said he and other officers drive on the freeway and local roads on campus in SUVs and sedans to analyze road conditions. He also receives reports on road conditions from the Michigan State Police.

When campus is closed, it includes all of the schools and colleges. Wright said the only exception are WSU extension centers hosted by community colleges like Macomb Community College. If the extension centers do not cancel school, then classes proceed for the day — despite their affiliation to WSU.

Decatur said the time of their weather consultations depends on when the extreme weather is expected to start.

“If the snow is expected to fall during the night, we (Wright, Holt and Whitfield) convene on a call around 4:30 a.m.,” he said. “If the weather event is expected during the day, and we are already on campus, we will meet in person or convene by the phone.”

Darin Ellis, vice president at the Office of the Provost, said he isn’t sure whether the university has a maximum amount of snow days.

Whitfield said there is no university-wide policy about school cancellations. Under the university’s current policy, professors can still require students to turn in assignments and take quizzes via Canvas.

“A professor can require students to attend a class through video chat,” he said. “This falls under reasonable variation to the standard class attendance policy and is up to the professor to decide on grading.”

Ellis said that because WSU is such a dynamic and complex school, there isn’t a “one-size-fits-all,” policy that applies to all colleges when classes get canceled.

Students in the School of Medicine are still required to attend clinical hours on snow days because the hospitals are still open.

“It’s not clear to students what buildings in the university are going to be open and it causes confusion,” Baum said. “They can try to link it to a detailed list of which buildings are going to stay open in the (text) messages/emails they send.”

He said the university needs a policy that applies to everyone.

“You can be flexible, but there needs to be more uniformity,” Baum said. “We need a big, arching umbrella, so we don’t have this confusing mess every time.”

Susana Hernandez is The South End’s WSU Board of Governors and campus housing beat reporter. She can be reached at susana.hernandez@wayne.edu. Cover photo by Jonathan Deschaine.