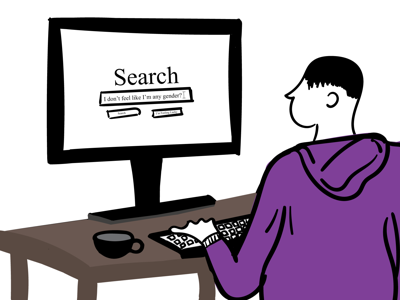 You never really think about your gender, until you have to. Until you realize that there is a distinct split in who you are and how people see you. When those two don’t align the weight of that sits heavy, with language and speech adding more to that mass.

For me, I avoided it. Avoided being labeled, brushing it off and most of the time flat out ignored it — that is until I couldn’t. It hit a point where I was always misgendered and felt incredibly uncomfortable in my own skin. Miss and ma’am suddenly took to my brain, grating at it like a block of sharp cheddar — she and her took bits of my soul. I know it sounds overly dramatic, but as someone who doesn’t fit into the binary system that this world was created for every day is a new set of challenges and being gendered.

Unfortunately, our language is pervaded by the binary. The singular ‘they’ throws people for a loop. ‘You guys,’ ‘ladies and gentlemen,’ or my pet peeve ‘sir’ or ‘ma’am’ — these small words reaffirm some in their gender, seem like nothing to others but are incredibly discomforting for people that don’t fit in our A or B culture.

When I was a kid I was labelled a tomboy. I rocked the bowl cut that was ever so popular in the 90’s and wore overall shorts and enjoyed life. I had absolutely zero concept of gender, gender roles and how people perceived me. I just was a kid — which was swell — up until puberty. As soon as those secondary sex characteristics developed, I was devastated but never understood why or what about my body I hated so much.

Somewhere in 2015 I was writing one night and wrote “… and yes, I do like comfort but it's not the clothes that make me feel comfortable. It's how I feel in them. I feel like a person not a binary gender. And while that seems odd it feels right. And I’m confused about everything now.” I unknowingly put words to a feeling that I’ve had since I was 13, the urge to simply be and be seen as a person.

Gender isn’t binary, so why is our language so late to catch up? According to a 2017 NBC News study 3% of teens are identifying as transgender or gender non-conforming. Eventually gender-neutral language will make its way into people’s natural speech patterns. A common set of gender inclusive pronouns used are they/them.

While they’re not the only gender-neutral ones, I use them and am most familiar with them. Instead of “he said,” it would be “they said.” For my grammarian folk who are likely screaming at me right now, look at some Shakespeare, ‘they’ is used as a singular third person pronoun and Merriam Webster has ‘they’ listed as an option for a third person singular pronoun.

It wasn’t until 2017 that I had decided to officially “out” myself to my friends as non-binary and have them use different pronouns, but I had been toying with them. Online I had already been using gender neutral pronouns, looking up other gender-neutral titles, relationship signifiers and figuring out everything I needed to know, so that when I asked my friends and loved ones to not gender me I could have all the information ready.

Wayne State has made strides in creating an inclusive campus for all, however the lack of a non-binary gender option for Academica or admissions is something to work on. The ability to change our preferred name across most WSU communications systems, is deserving of praise.

If someone asks you your pronouns, ask for theirs — and use them. Correct yourself if you slip up and move forward. Let’s continue to further make our campus culture one that is inclusive and safe for all.

Now we face with unbalanced gender in some countries. This is incredible problem when there're not enough women for men to get married. Ps ram may tinh

Superbly written article, if only all bloggers offered the same content as you, the internet would be a far better place.. ricer masher

Interesting post. I Have Been wondering about this issue, so thanks for posting. Pretty cool post.It 's really very nice and Useful post.Thanks BEST ACTIVEWEAR

I really like your take on the issue. I now have a clear idea on what this matter is all about.. 먹튀검증업체

i read a lot of stuff and i found that the way of writing to clearifing that exactly want to say was very good so i am impressed and ilike to come again in future.. mobile phone tracker