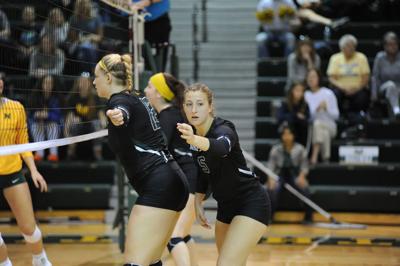 Senior Hailey Richardson had her eyes set on playing volleyball at the collegiate level since she was 10.

“From the start, I knew that I wanted to play and continue my career after high school,” the Wayne State volleyball captain said.

In addition to fulfilling that goal, Richardson is leaving a lasting legacy at WSU. The kinesiology student played a substantial role in the Warriors’ qualifications for three Great Lakes Intercollegiate Athletic Conference tournaments during her tenure.

On the court Richardson wasted little time gaining the trust of the coaching staff, starting in 21 matches and playing in all 30 matches her freshman year. That year, Richardson had eight contests with 10 or more kills.

In 2016, Richardson continued to play at a high level before missing two matches due to injury. Head coach Tim Koth said Richardson was disappointed about not being able to perform her best while injured.

“She was able to play but was very limited and was not very explosive,” Koth said. “I think this gave her a lot of motivation going forward that propelled her to a two-time All-GLIAC First Team level.”

Richardson returned to full health in 2017 and was voted to the All-GLIAC First Team that year. She started in 28 matches and led the team with 385 kills, had 37 service aces and 15 double-doubles. WSU’s win over Grand Valley State University in the conference tournament quarterfinals that year was the first postseason victory for the program since 2012.

Richardson was named a team captain this season. She said communication is key to being successful in a leadership position.

“Communication and trust are a big part (of being a good captain) because there are six of you on the court, and if all six players aren’t working together, you’re never going to get anywhere,” Richardson said. “You need to have each other’s back.”

Richardson was named GLIAC South Player of the Week four times in 2018. She started in all 28 matches and only missed two of the team’s 100 sets during the season.

Koth said Richardson’s desire to better herself as an athlete helped her succeed on the court.

“She is very athletic and had the drive to improve her game,” Koth said.

Koth said Richardson’s ability to play more than one position on the court helped her grow throughout her collegiate volleyball career.

“As a freshman, she only played backcourt,” Koth said. “As her strength and confidence improved, she expanded her on-court role.”

Richardson credits imagery — a strategy that the volleyball team uses to boost confidence before important matches — for her success during her senior year.

After graduation, Richardson said she hopes to stay in the game by coaching volleyball.